Economic management is fairly good in Slovenia. Public finances showed modest deficits of about 1.4% of GDP through 2001. The debt to GDP ratio was 37% in 2001. Privatization has been relatively successful, although some of the business practices of the Yugoslav brand of communism have carried over to the newly private enterprises.

The US Central Intelligence Agency (CIA) estimates that in 1997 Slovenia's central government took in revenues of approximately $8.1 billion and had expenditures of $8.3 billion. Overall, the government registered a deficit of approximately $210 million. External debt totaled $7.9 billion. 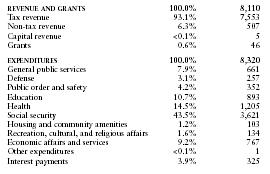