Since the dissolution of Czechoslovakia, the Slovak government has implemented several measures to compensate for the large loss of fiscal transfers it received from the Federation, which were equivalent to between Sk 20–25 billion in 1992. The Slovak government's initial budget was balanced at the beginning of 1992, with revenues and expenditures equivalent to Sk 159 billion. Since that time, however, Slovakia's budget has fallen into deficit. Privatization efforts have been successful, attracting a large amount of foreign direct investment (FDI). 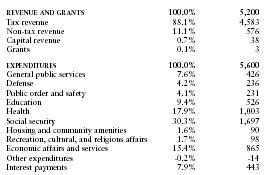