Since the breakup of the COMECON and the Soviet Union, trade disruptions and friction between Russia and the governments of the former Soviet republics had led to an enormous expansion of the fiscal deficit. The deficit was financed largely through sales of domestic government securities and borrowing from international financial institutions. Consequently, the government had sharply restrained spending in an attempt to keep the federal budget deficit to under 6% of GDP. Government spending remains about 38% of GDP, but the government has manages to achieve a small surplus. The external debt was estimated to rise about $19 billion in 2003 as a result of higher Ministry of Finance and Eurobond payments. 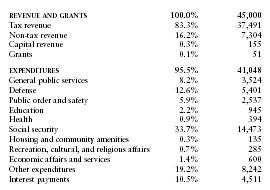