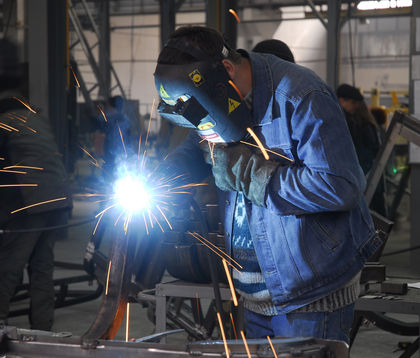 Steel production remains a key industry. Once the world leader in the production of steel, that Russian industry fell on hard times in the 1980s as Soviet-made products could not keep up with the quality or output of competitors. Nonetheless, plants continue to operate although less than half use updated equipment.

Aluminum and nickel production continue, particularly in mineral rich Siberia. The largest companies are the Noril'sk Nickel Joint-Stock Company, Bratsk Aluminum, Krasnoyarsk Aluminum, and Sayan Aluminum. European Russia and the Ural region continue to serve as the center for the production of textiles and machine industry. Chemical production is scattered throughout the country, while the center of the oil and gas industry remains the region of the Caucasus Mountains and Caspian Sea. The oil industry was dominated in 2002 by 11 large companies which accounted for around 90% of production and close to 80% of refining. Russia had 42 oil refineries in 2002, with a total capacity of 5,436,000 barrels per day.

Russia's industrial base is outmoded and must be restructured or replaced in order for the country to maintain strong economic growth. Nonetheless, Russia emerged from its 1998 economic crisis with an industrial growth rate of 5.2% in 2001. That year, industry accounted for 39% of GDP and employed 28% of the work force. Oil, fuel, and gas made up 54% of Russia's exports in 2000, followed by iron and steel, aluminum, precious metals and stones, and machinery and equipment. Other industrial areas of growth in the early 2000s include construction, automotive equipment, aircraft, and food processing. Russia produced 1,249,582 automobiles in 2001, a 4% increase over 2000. In 2000, it produced 44,123 heavy trucks, a 22% increase over 1999.

Hi i go to georgia washington junior high school in alabama, and i am doing some research for a project in geography. I think that this web site gave me alot of great facts on the wonderful types of industries in Russia! Thank you for having such a wonderful and great DETAILED website on very true facts on Russia's industries.

OMG this website is so good it helped me understand industrys in russia thank you so much! I LOVE RUSSIA
4
Isabelle

Hey I'm a freshman this year and we have this HUGE country project in geography to turn in. I just wanted to thank you for putting up such a useful site, because its helped me out with my project. I'll definetly recommend this site to all of my friends/classmates. Thanks! ~ Isabelle:D