The annual budget is presented to the Grand National Assembly around December and becomes effective for the fiscal year on 1 January. The state budget, prepared by the Ministry of Finance, is a central part of the financial plan for the whole economy. The reduction of the growth rate of expenditures during the early 1980s was in keeping with an economic stabilization program designed to hold down domestic investment and consumption. As a result of fiscal reforms begun since the fall of the Ceausescu regime in December 1989, adherence to IMF fiscal targets, and an unanticipated inflation-fed revenue windfall during the first half, the central government unofficially recorded a relatively modest deficit for 1991.

Privatization of industry was accomplished in 1992 with the transfer of 30% of the shares of about 6,000 state-owned businesses to five private ownership funds, in which each adult citizen received certificates of ownership. About 45% of enterprises remain under state control today, and account for about 35% of GDP.

The US Central Intelligence Agency (CIA) estimates that in 1999 Romania's central government took in revenues of approximately $11.7 billion and had expenditures of $12.4 billion. Overall, the government registered a deficit of approximately $700 million. External debt totaled $11.6 billion. 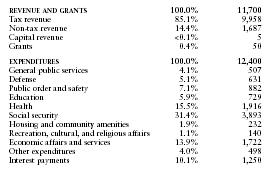