Trade with Western countries has involved growing amounts of credits in recent years. As a result of a series of devaluations of the Romanian leu dating from February 1990, Western imports became increasingly costly while the quality of Romania's exports significantly declined. Romania's poor performance was additionally due to its reliance on the importation of raw materials—such as oil, natural gas and minerals—which accounted for as much as 80% of imports in 1995, leaving little exchange currency for equipment and technology.

Current account deficits have been financed in large measure by loans and grants from international financial institutions, but Romania has attempted to diversify its sources of external financing. Romania's external debt stood at $11.6 billion in 2001. The country's international risk ratings have made it difficult for Romania to borrow from the private international credit market.

The US Central Intelligence Agency (CIA) reports that in 2001 the purchasing power parity of Romania's exports was $11.5 billion while imports totaled $14.4 billion resulting in a trade deficit of $2.9 billion.

The International Monetary Fund (IMF) reports that in 2001 Romania had exports of goods totaling $11.4 billion and imports totaling $14.4 billion. The services credit totaled $1.99 billion and debit $2.20 billion. The following table summarizes Romania's balance of payments as reported by the IMF for 2001 in millions of US dollars. 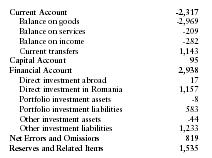