The Portuguese railways are almost entirely owned and operated by the nationalized Portuguese Railway Company. The railway system, which is adequate for Portugal's needs, totals 2,850 km (1,771 mi) of track, comprised mostly of wide gauge (1.67 m) single track, of which 623 km (387 mi) have been electrified.

As of 2002, the Portuguese merchant fleet had 140 oceangoing vessels of over 1,000 gross tons, totaling 1,001,440 GRT. The main shipping firm is the Portuguese Maritime Transport Co., created after the private shipping companies were nationalized in 1975. It maintains scheduled services to the Azores, Madeira, Macao, and the former overseas territories in Africa; there is regular service to Brazil and North America. The chief ports—Lisbon (the largest), Porto, Ponta Delgada, and Sines—are all fully equipped and have adequate warehousing facilities. Portugal has created a captive register of convenience on Madeira for Portuguese-owned ships, allowing for taxation and crewing benefits.

In 2001, Portugal had 67 airports, 40 with paved runways. Because of their geographical position, Lisbon's Portela Airport and Santa Maria in the Azores are of great importance in international aviation. Portela is one of the principal airports for overseas flights to North and South America and to western and 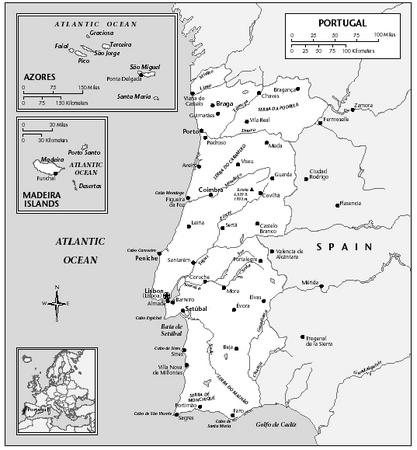 central Africa; Santa Maria is a stopping point for transoceanic flights from Europe to North America. The most important aviation company in Portugal is Transportes Aereos Portugueses (TAP), which was nationalized in 1975. In 2001, 6,650,800 passengers were carried on domestic and international scheduled flights.

this artilvle is very nice, it help me to find all the things that I needed for my project:) THANK YOU