Despite chronic trade deficits, Portugal until 1973 managed to achieve a balance-of-payments surplus through tourist revenues and remittances from emigrant workers. With the economic dislocations of 1974, net tourist receipts fell 30%; the trade deficit almost doubled; and emigrant remittances stagnated—thus, the 1973 payments surplus of $255.7 million became a $647.7 million deficit in 1974. Emigrant remittances grew steadily between 1976 and 1980, when they peaked at $2,946 million. Because of this, Portugal's balance of payments improved and in 1979 even showed a surplus of $761 million. Subsequently, however, increasing trade deficits resulted in balance-of-payments deficits that reached $3.2 billion in 1982. By 1985, however, the deficit had become a surplus of $0.4 billion, which rose to $1.1 billion in 1986; the chief reason was the weakening dollar, which boosted the value of tourism earnings and remittances. The 1990 Portuguese external payments surplus stabilized at the previous year's record level of nearly $4 billion. After a few years of surplus boom, mainly due to the enormous influx of foreign capital and transfers to Portugal following EC membership in 1986, measures were taken in July 1990 to restrict foreign credit and investment thereby helping the authorities get better control over monetary aggregates. These measures, along with the hiatus in international investment caused by the Gulf crisis and some deterioration in the merchandise trade account contributed to halting the growth of the total nonmonetary balance.

The country's large current account deficit was forecast to narrow from 7.5% in 2002 to 4.2% in 2004. Although foreign direct investment (FDI) in new manufacturing projects, such as the automotive and electronics sectors, increased in the 1990s, in the early 2000s FDI flowed to lower-cost manufacturing locations in Central and Eastern Europe, away from Portugal.

The US Central Intelligence Agency (CIA) reports that in 2001 the purchasing power parity of Portugal's exports was $25.9 billion while imports totaled $39 billion resulting in a trade deficit of $13.1 billion.

The International Monetary Fund (IMF) reports that in 2001 Portugal had exports of goods totaling $25.8 billion and imports totaling $38.8 billion. The services credit totaled $8.79 billion and debit $6.19 billion. The following table summarizes Portugal's balance of payments as reported by the IMF for 2001 in millions of US dollars. 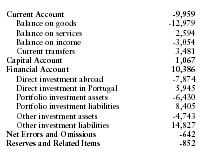