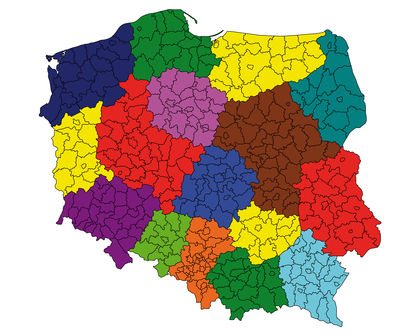 Before World War II, Poland had encompassed a territory of nearly 390,000 sq km (150,600 sq mi). On 11 July 1920, an armistice mediated by Britain in a Polish-Soviet conflict established the "Curzon line" (named for George Nathaniel Curzon, the British statesman who proposed it), conferring the former Austrian territory of Galicia to the Soviet side. However, under the Treaty of Riga (1921), all of Galicia was assigned to Poland, and a boundary well to the east of the Curzon line prevailed until World War II. At the Yalta Conference in February 1945, the Allies accepted Soviet claims to eastern Poland, with a border running approximately along the Curzon line. On 21 April 1945, a Polish-Soviet treaty of friendship and cooperation was signed, followed by a new agreement on the Polish-Soviet border. To compensate for the loss of 46% of Poland's territory to the USSR, the Potsdam Conference of July–August 1945 placed former German territories east of the Oder (Odra) and western Neisse rivers under Polish administration, pending a final determination by a German peace treaty. On 6 August 1950, an agreement was signed between Poland and the GDR according to which both parties recognized the frontier on the Oder-Neisse line. The Federal Republic of Germany (FRG) recognized this boundary under the terms of a treaty signed with Poland on 7 December 1970 and ratified by the FRG on 23 May 1972.

Poland's capital city, Warsaw, is located in the east central part of the country.

I went to Poland last week, it was awesome! There is loads of dancing and they all wear flowers and red clothes.