Norway's fiscal year coincides with the calendar year. As one of the per capita richest countries in the world, Norway has a great deal of money to spend on investment, focusing especially on the offshore oil sector. The government maintains a Petroleum Fund that reached $67 billion at the end of 2001. The Fund will be used to finance government programs once oil and gas resources are depleted. 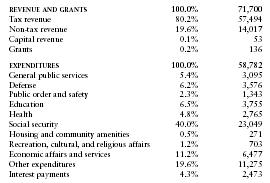