Most of the telecommunications network is operated by the government-owned Televerket. The state owns all telephone facilities. In 1998, there were 2.7 million main line phones in use and 2 million mobile cellular phones.

All radio and television broadcasting is controlled by the Norwegian Broadcasting Corp., an autonomous public corporation. As of 1998 Norway had 5 AM and at least 650 FM radio broadcasting stations. Educational broadcasts supplement school facilities in remote districts. Radio license fees have not been required since 1977. Television programming on an experimental basis was initiated in 1958 and full-scale television transmission began in July 1960. As of 1995 there were 360 television stations. Most households have at least one television set; in 2000 there were about 915 radios and 669 television sets for every 1,000 people. The same year there were about 491 personal computers in use for every 1,000 people. About 13 Internet service providers served 2.45 million customers in 2001.

The Norwegian press is characterized by a large number of small newspapers. The following are the largest dailies with their circulations in 2002: 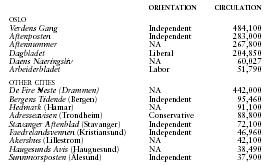 The constitution provides for freedom of speech and of the press and the Government generally respects these rights.