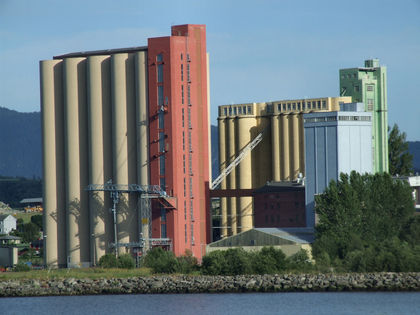 Manufacturing, mining, and crude petroleum and gas production accounted for nearly 31% of the GDP in 2000. The most important export industries are oil and gas extraction, metalworking, pulp and paper, chemical products, and processed fish. Products traditionally classified as home market industries (electrical and nonelectrical machinery, casting and foundry products, textiles, paints, varnishes, rubber goods, and furniture) also make an important contribution. Electrochemical and electrometallurgical products—aluminum, ferroalloys, steel, nickel, copper, magnesium, and fertilizers—are based mainly on Norway's low-cost electric power. Without any bauxite reserves of its own, Norway has thus been able to become a leading producer of aluminum. Industrial output is being increasingly diversified.

About half of Norway's industries are situated in the Oslofjord area. Other industrial centers are located around major cities along the coast as far north as Trondheim. Norway had two oil refineries, with a capacity of 310,000 barrels per day in 2002. In the early 2000s, despite an improvement in world oil prices, investment in offshore oil and natural gas remained in decline, in part due to the completion of major projects, such as the Aasgard field. Crude oil and natural gas accounted for 58% of merchandise exports in 2000, and petroleum production rose to 22.7% of GDP in 2000, compared with 14.2% in 1999. Norway's oil and gas reserves are declining; discovered oil reserves were projected to last 18 years in 2000, and natural gas reserves to last 95 years. About 35% of industry is state-owned, including control of the state oil company, Statoil.

THIS SITE REALLY HELPED ME FOR MY COUNTRY REPORT ON NORWAY !!!!!
2
Connor Bailey

I have Norway 4 my report and this site really helped a lot!!!!!!
3
Juan gonzalez

This is a great site to obtain information that most other sites do not have.
5
M afzal bajwa

The information is very usefull if a businesman want to know about the country and its resorces.
6
Love to travel

This website really helped me with my report. It has all of the specifications that i needed!
7
Kassidee

This website did not really give me the info that i needed for my report. But it is a good website if this is the right info that you will need.
8
jazzi

Thank you for the information it really helped me with my assignment thak you add more information!!!
9
Lukey Saybo

This website is the best. Definitly helped me wit my report :D
11
Hunter

This website helped me with my social sudies project. thank you nationsencycopedia.com creaters!!! :)
12
robert

I have visited Norway Two times and found country very beautiful,Full of Nature and its resources. Primary material including silicon Aluminum and other items can be exported from Norway to other countries of the world.Piece full country any one can travel any area with out any danger.
14
pam

This site was REALLY helpful for my report. Thanks!
16
Queen of the basement

thank ypu so much this helped me so much with my report wich i will make into a fake travel brochure!
17
Nick Saban

This was a very helpful site for my research paper on Norway. I will use this website to find some eligible athletes to play football at Alabama.
18
_Minty_Lemon_

This site really helped with my Norway business report! It has everything i needed that i couldn't find anywhere about Norway's exports, and its industries.