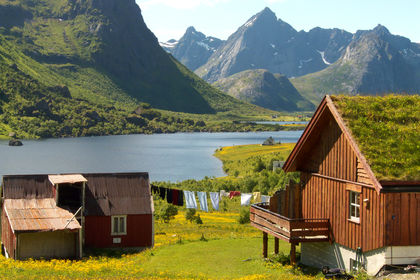 Although the proportion of larger farms has been increasing, most farms in 1990 were still small, with about 99% of the 84,635 farm holdings (including meadows) consisting of less than 50 ha (124 acres) of arable land. Because of the small size of the holdings, many farm families pursue additional occupations, mainly in forestry, fishing, and handicrafts. Yields in 2001 included 1,203,000 tons of grain (51% barley, 28% oats, 21% wheat) and 388,200 tons of potatoes. Østfold county accounted for 21% of Norway's grain production in 2001; Hedmark county for 34% of potato production that year. Norway imports most of its grain and large quantities of its fruits and vegetables.

With steep slopes and heavy precipitation, Norway requires substantial quantities of fertilizers to counteract soil leaching. Smallholders and those in marginal farming areas in the north and in the mountains receive considerable government assistance for the purchase of fertilizers. Mechanization of agriculture is developing rapidly. In 1998, Norwegian farmers used 148,000 tractors and 16,000 combines.

Since 1928, the state has subsidized Norwegian grain production; a state monopoly over the import of grains maintains the price of Norwegian-grown grains. The Ministry of Agriculture has divisions dealing with agricultural education, economics, and other aspects. Each county has an agricultural society headed by a government official. These societies, financed half by the district and half by the state, implement government schemes for improving agricultural practices.

This article is very easy to use and i am only a junior high student. This site is comprehensible and i am thankful for the knowledge that comes forth from reading this page. In social studies, we are working on a project on Norway and agriculture is [believed to be] a big part of the income and nationality. Thank you so much to the people that created this site; it saved me time and sites like this are cherishable.
2
Catherine

this helped me so much because i needed to know the chief products!!!
3
Rachel

This helped me so much because i'm doing a project on Norway in social studies and i needed to write a essay on the five themes of geography, i got alot of good notes and information from this. I will definitely be recommending this site to others.
4
allix

This helped me a lot. I'm in middle school and we're doing country reports. Obviously, i have Norway.
5
matt

hey.... LOVE THIS WEBSITE so much info really good but i think you should the author of this page when it was made stuff to put in a bibliography but other than that love this whole website I'dgive this website a 9/10
6
Ashley

Thank you so much for your help. I am so thankful for this. It helped me a lot with my report that I had to do. If it wasn't for this site I wouldn't have got my report finished in time. I would for a fact come to this site again for any of my other projects or anything. I will also have some of my friends come here if they're having trouble with any of their notes for classes. Once again thank you.
7
Bananas

this website is GREAT. i am doing a project on norway for social studies and it really helped
8
Kiya_NickerBocker

This website gave me a;pt of useful information for my Culinary arts class Im doing a project on norway if this website had a bibliography it would be absolutely perfect but even without one this has helped me with most of my project
9
Natanya

This helped me a lot because I'm doing a report on Norway.
10
SOUL

Great info. Really helped man was doin my freaking project on norway on the last minute and got all my info from here! GREAT STUFF
11
Ashlee

I used this for a food report and i did really well I love this i think it is a good wsite to use i needed this for forign language on cultures im norwegian I should know this stuff but o well. LOVE THIS SITE!
13
Birgit

I am love with website. Me from Norway and me miss me home. This brings me back to times in Finnkongkeila.
14
Kaitlyn

THIS SITE IS VERY GOOD . I AM A STUDENT OF CLASS 9. I HAD A PROJECT ON NORWAY AGRICULTURAL TECHNIQUES. THIS SITE HELP ME VERY MUCH.
16
Lillie

For all of you who are saying you used this site in Junior High, SAVE IT! You'll need it in you're high school AP classes and college as well! So helpful! Thanks Nations Encyclopedia!
17
jesse

I was doing a report for my gifted group on Norway and this site helped me alot!
19
Fredrick Mirimu

I am a passionate young upcoming farmer in Uganda and I wish to know more about agriculture/agribusiness. thank you.
20
Excalibur

This saves lives!! seriously helped me with my research workbook!!!
21
vincent kalala

Thanks for this information. I am searching that why agriculture in India is at the lower level than the the countries. Everyone knows that Norway is the most developed country in the world .I wanna develop the Indian agriculture.i also request you make such a report on India.