The government has gradually cut the deficit from 10% of GDP in 1983 to 2.75% in 1996, slightly below the 3% Maastricht criteria for European Economic and Monetary Union (EMU) in 1999. The deficit is largely financed by government bonds. Financing is also covered by issuing Dutch Treasury Certificates, which replaced a standing credit facility for short-term deficit financing with the Netherlands Central Bank. Under the Maastricht Treaty, the Netherlands Central Bank was abolished in 1994.

Although the private sector is the cornerstone of the economy, the government plays a vital role in the Netherlands' economy. It decides microeconomic policy and tax laws, as well as working toward structural and regulatory reforms. Public spending, however, had dropped to 46% of GDP as of 2000 as privatization and dergulation continued.

The US Central Intelligence Agency (CIA) estimates that in 2001 the Netherlands's central government took in revenues of approximately $134 billion and had expenditures of $134 billion. 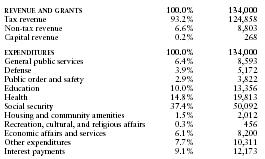