The post office, telegraph, and telephone systems are operated by the government. The state's monopoly on postal services is confined to delivery of letters and postcards; about half of other deliveries are handled by private firms. In 1977, postal codes were introduced for addresses as part of a postal modernization program. As of 1999 there were 9.1 million main line telephones and 4 million mobile cellular phones in use. Significant improvements in the phone systems began in 2001 through the introduction of the third generation of the Global System for Mobile Communications.

There are several radio networks. The Netherlands Broadcasting Foundation, a joint foundation, maintains and makes available all studios, technical equipment, record and music libraries, orchestras, and other facilities. Broadcasting to other countries is carried on by the Netherlands World Broadcasting Service, which is managed by a board of governors appointed by the minister of cultural affairs. As of 1998 there are 4 AM and 58 FM stations. There were also about 21 television stations. Shortwave programs are transmitted in Dutch, Afrikaans, Arabic, English, French, Indonesian, Portuguese, and Spanish. Annual license fees are charged to radio and television set owners. Commercial advertising was introduced in 1967–68 and limited to fixed times before and after news broadcasts. In 2000, there were about 980 radios and 538 televisions for every 1,000 people. The same year, there were about 394 personal computers for every 1,000 people. About 52 Internet service providers served 8.7 million customers in 2001.

The Dutch were among the first to issue regular daily newspapers. The oldest newspaper, the Oprechte Haarlemsche Courant, was founded in 1656 and is published today as the Haarlemsche Courant. The Dutch press is largely a subscription press, depending for two-thirds of its income on advertising. Editorial boards, however, are usually completely independent of the commercial management.

In 2002, the largest national and regional newspapers, with daily circulations, were: 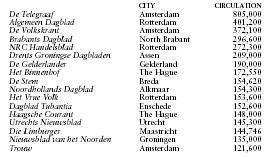 Complete freedom of speech and press is guaranteed by the constitution, and the government is said to fully support free expression in practice.