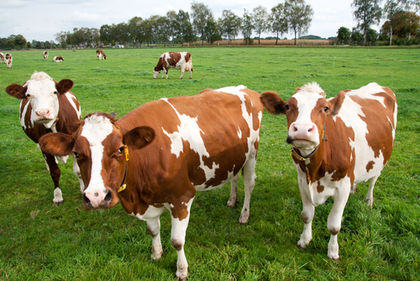 More than 27% of the total land area of the Netherlands is under seasonal or permanent crop production. Grasslands account for about 54% of all agricultural lands. Most farms are effectively managed and worked intensively with mechanical equipment. The many cooperatives have added to the efficiency of production and distribution.

Although agricultural production has decreased in recent years, labor productivity in Dutch agricultural and horticultural industries has risen sharply. The number of holdings declined by over 17% from the mid–1970s to the mid–1980s; in 2000 there were 51,725 arable holdings. The agricultural labor force totaled 254,000 in 1999.

Much of the soil in the east and southeast is poor. Moreover, large regions are so moist because of their low altitude that only grass can be grown profitably, a condition that has led to the enormous development of the dairy industry. The best land is found in reclaimed polders. Principal crops and output in 2002 (in millions of kg) were sugar beets, 6,250; potatoes, 7,363; wheat, 1,057; barley, 315; rye, 17; and triticale, 24.

The Netherlands is famous for its bulbs grown for export, principally tulip, hyacinth, daffodil, narcissus, and crocus. Flower growing is centered at Aalsmeer (near Amsterdam), and nurseries are situated mainly at Boskoop. Bulb growing, done principally at Lisse and Hillegom, between Haarlem and Leiden, has been extended in recent years to areas of North Holland. In 2000, land area for growing bulbs totaled 22,543 hectares (55,700 acres).

Since the beginning of this century, the government has been helping the agrarian sector through extension services, the promotion of scientific research, and the creation of specific types of agricultural education. In the 1930s, an extensive system of governmental controls of agricultural production was introduced, and after World War II (1939–45), an even more active policy was initiated, which evolved into integrated planning covering practically every aspect of rural life. In recent years, the government has actively encouraged the consolidation of small landholdings into larger, more efficient units.

Hi, i was doing a research project and this site helped me so much....THANKS!!!!!!
2
kennedy gold obiefuna

Sites like tis are very helpfull and I wish there were more. I have agric products to export out of Nigeria; ginger, beniseed etc and would like sites that can assist me find buyers.
3
Katie

this website helped me so much and i hope i can find more resources out of this website!!!
4
mengesha

I have recently read that after the tulips are done blooming for the season, the fields are plowed and replanted with crops. Is that true? How do the fields maintain any nutrients with a schedule like that?

Would appreciate any information. Thanks!
6
Hemant Tekade

This website helped me to know about Netherlands Agriculture. Thanks!
7
alexis

omg i love this website it is the second time i have used it and i love it! i have a project do on the netherlands and this is relle helping
8
amadou

I am a gambian nacial studying agricultural engineering in the bolivarian republic of venezuela. i really like your site and hope to hearing from you, as i strongly believe that i can learn a lot from you... thank you in advance
9
sugi

well!!this is a good site as i searched everywhere on net for a particular topic and the right information was only in this sight...
10
Jones Mose

This website is more than a library. Every information is just on my finger tips. Upload more and more information so that we can use it in learning institutions and research centres. Thank you.
11
MUMO REGINA

am impressed by this website because it has really given me an insight about Netherlands and its Agricultural activities.they are excellent in farming.keep it up!the world rely on Agriculture.
12
Zack sayas :)

HI :) im from Raymondville Texas this is my fourth time usig it well it helps me alot this is awsome site in a sophmore and im doing a project on Netherland i have to give the major landforms/features,major cities,natural reaouces and agrcultural/industrialproduction and this site helped me all THANKS
13
hemant walia

I am a farmer frm indiA,i want to shift to holland and want to start producing flowers there. can anyone help me.
14
Arun

I am a from India. I want to start doing agriculture in Netherlands. Can anyone help me.
15
mistah

I'm a senior in high school in Minnesota and I know nothing about Holland. Thanks for the info!
16
BakedAllDay420

AMAZING site! This helped me so much! I found EVERYTHING that I was looking for! :)
18
NetherlandishUnicorn

Great website for projects I will use it again and I am doing a prodject on holland and it helped with agriculture
19
JULIUS,ASANTE NTULO

Thank you very much educating us concerning the issues relatina to agriculture,
I would like to learm more on this field especially hotcultural field.
20
Muzoora kenneth

I am from uganda and this website has helped me a lot to learn about what is being done in the netherlands,and will help me grow my association calledkyenjojo district farmers association,
i would like to learn a bout how the coffee value chain is being developed in netherlands
21
NICK LU

I am from China and this website really help me a lot to do my research.
22
isaac yansayidiye

hi i just saw this website and it helped me and my classmates so much.
23
Kevin Rempel

WOW!! Thanks so much! I am just writing my exam about culture. Super boring exam but this website is extremely helpful! There needs to be more websites like this...
24
Okoro

This site have increased my idea of farming and believe there are more things to learn from the Netherlands farmers. I am a member of a cooperative society of farmers in Okpanku Community in Aninri LGA of Enugu State, South East Nigeria and we have large flat lands but lacks modern methods of farming mechanisely .
25
Okello Simon Peter

How can I be helped?

thx! I was looking for this cause I have a school project and I need this thx I will be coming back soon!!
27
Joanne

On FB a map was shown that while the US is 221 times bigger than the Netherlands, the Netherlands was second only to the US for agricultural production and export. I contacted my Dutch friend who wasnâ€™t believing this information. So thanks for providing confirmation for me.
28
christopher

I was doing a report and this website helped a lot thanks THANK U GUYS U HELPED SO MUCH PEOPLELIKE ME I HOPE U DO SOME MORE THINGS LIKE THIS!
29
Olive

I have to a slideshow on the Netherlands and this resource helped me SO much!!! THANK YOU!!!
30
Jeanette

One of my children is returning to North Holland ,hopefully area of Heiloo , alkmaar. Do small farms or smaller areas of farmland become available very often in these areas? Would appreciate any information available. Many thanks.