External debt stood at $1.3 billion in 2002. That year, $168.7 million in debt service payments were due, accounting for over 60% of all budget revenues. The government took the dramatic step of handing 50% of ownership of its gas lines to Russia's Gazprom, one of its largest creditors. In 2000, the IMF had approved a three-year $142 million loan to reduce poverty and promote growth, which was due to expire in December 2003.

The US Central Intelligence Agency (CIA) reports that in 2002 the purchasing power parity of Moldova's exports was $590 million while imports totaled $980 million resulting in a trade deficit of $390 million.

The International Monetary Fund (IMF) reports that in 2001 Moldova had exports of goods totaling $570 million and imports totaling $882 million. The services credit totaled $170 million and debit $219 million. The following table summarizes Moldova's balance of payments as reported by the IMF for 2001 in millions of US dollars. 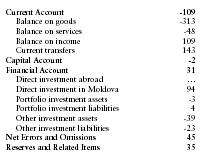