The principal sources of recurrent revenues are income taxes, and customs and excise taxes. Tourism is steadily increasing as an important segment of the economy, although the September 11 terrorist attacks put a damper on it. Malta has developed a fairly high budget deficit in recent years, and fiscal policy has been dedicated to reversing the situation. Public debt grew from 24% of GDP in 1990 to 56% in 1999, but by 2000 it had been brought down to just 6.6% of GDP. 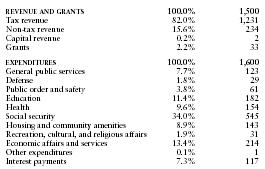