Lithuania had, of course, a planned economy under the Soviet regime, and the implementation of collective farming ravaged the agricultural sector for over a decade. It was not until the early 1960s and the introduction of chemicals that crop production recovered to pre-WWII levels. The crop boom that followed as a result of the chemical innovations left many ecological problems. Privatization following independence occurred slowly but steadily, and in 1998 it looked like the economy had survived the growing pains of dismantling the socialist system. However, the August 1998 collapse of the Russian ruble reverted Lithuania's economy back to negative growth and refocused the country's trade toward the West. In 1997, exports to former Soviet nations accounted for 45% of total exports. By 2002, that number was only 19%, as 71% of exports went to EU member countries and candidates. Privatization was nearly complete as of 2002, except for the energy sector, where energy company privatization was completely on hold and gas company privatization delayed.

The US Central Intelligence Agency (CIA) estimates that in 2001 Lithuania's central government took in revenues of about $1.6 billion and had expenditures of $1.8 billion. Overall, the government registered a deficit of approximately $180 million. External debt totaled $5.8 billion. 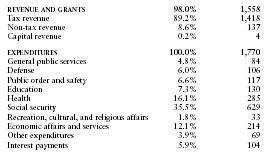