From the 14th to the 18th centuries, the Grand Duchy of Lithuania was linked to the Kingdom of Poland. What is now Lithuania, though, was annexed to the Russian Empire in the final partition of the Polish-Lithuanian state in 1795. During the 19th century, a Lithuanian nationalist movement arose.

On 16 February 1918, Lithuania proclaimed its independence. The new Bolshevik government in Moscow attempted to establish Soviet power in Lithuania, but failed. In July 1920, Moscow recognized Lithuanian independence. A secret protocol to the 1939 Nazi-Soviet pact assigned Lithuania to the Soviet sphere of influence.

Wishing to avoid conflict, the Lithuanian government allowed Soviet forces to be stationed on its territory. The local government was forced to resign in June 1940. Rigged elections led to a parliament, which proclaimed Lithuania to be a Soviet Socialist Republic in July 1940. Moscow lost control of Lithuania soon after Germany attacked the USSR in June 1941. Soviet forces recaptured Lithuania in 1944.

Soviet president Mikhail Gorbachev's policy of glasnost and perestroika allowed Lithuanians to voice their long-suppressed desire for national self-determination. Free elections to the Lithuanian Supreme Soviet on 24 February 1990 resulted in Sajudis—an anti-Communist Lithuanian reform movement— becoming the most influential force in the legislature at the expense of the Communists. On 11 March 1990, Lithuanian independence was proclaimed, but this was not generally recognized until after the abortive August 1991 coup attempt in Moscow.

Since independence, Lithuania has been preoccupied with reforming its economic and political institutions. Privatization has transformed its economy to a market-oriented one. Politically, a thriving press and open democracy have been established. Former communists won the first post-independence elections in 1992, but conservatives took back the parliament in 1996 elections, in response to growing allegations of government corruption. Presidential elections the following year were surrounded by controversy over the eligibility for office of candidate Valdas Adamkus, who had lived in the United States for over 30 years following World War II. Adamkus was elected in runoff elections in January 1998.

Parliamentary elections were held on 8 October 2000, resulting in a win for former president Algirdas Brazauskas' Social Democratic Coalition, which won 31.1% of the vote, taking 51 of 141 seats in the Seimas. However, a grouping of four smaller parties formed a new centrist government with Rolandas Paksas as prime minister. Presidential elections were held on 22 December 2002, and Adamkus took the lead in the first round of voting, with 35.3% of the vote, to 19.7% for Paksas. Paksas campaigned vigorously for the run-off vote held on 5 January 2003, winning 54.9% to 45.1% for Adamkus.

Given the history of Russian domination of Lithuania, it is understandable that Lithuania's primary foreign policy objective has been to improve relations with the West and especially to gain entrance into NATO and the EU. In November 2002, Lithuania 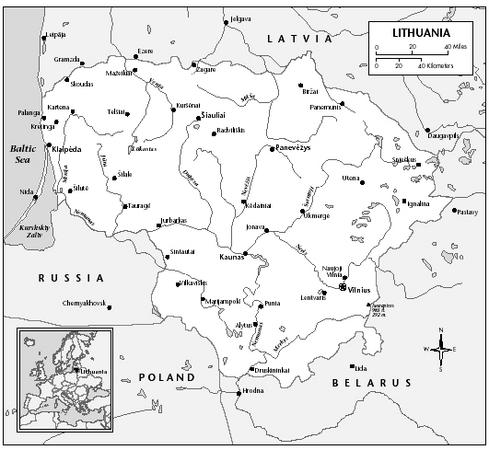 was formally invited to join NATO, with accession planned for 2004. In December 2002, the EU extended an official invitation to Lithuania to join the body by 2004 as well. Lithuania supported the 2003 US-led military campaign to disarm and remove Saddam Hussein's regime in Iraq.