Latvia's structural transition out of the planned economy under communism has occurred more or less spontaneously since independence. As of 2002, the thriving private sector accounted for two-thirds of employment and GDP. Privatization is generally considered to be near-finished; although the government still owns a few key companies, most are in private hands, even the utilities, and the government is working to sell off its ownership of what remains in order to satisfy its commitments to the IMF. 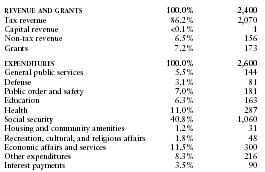