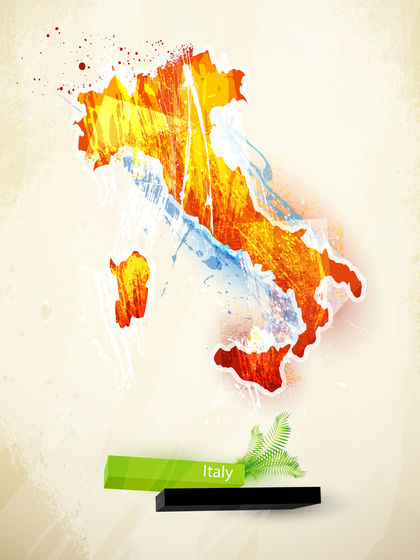 Except for the fertile Po River Valley in the north and the narrow coastal belts farther south, Italy's mainland is generally mountainous, with considerable seismic activity. During Roman times, the city of Pompeii, near present-day Naples (Napoli), was devastated first by an earthquake in AD 63 and then by the famed eruption of Mt. Vesuvius (1,277 m/4,190 ft) in AD 79. In the last century, an earthquake in northeastern Italy on 6 May 1976 left more than 900 people dead, and a quake in the south on 23 November 1980 (and subsequent aftershocks) claimed at least 4,500 lives.

At the foot of the Alps, the Po River, the only large river in Italy, flows from west to east, draining plains covering about 17% of Italy's total area and forming the agricultural and industrial heartland. The Apennines, the rugged backbone of peninsular Italy, rise to form the southern border of the Po Plain. Numerous streams and a few small rivers, including the Arno and the Tiber (Tevere), flow from the Apennines to the west coast. The highest peak on the peninsula is Corvo Grande (2,912 m/9,554 ft). Vesuvius is the only active volcano on the European mainland.

While altitudes are lower in southern Italy, the Calabrian coast is still rugged. Among the narrow, fertile coastal plains, the Plain of Foggia in northern Apulia, which starts along the Adriatic, and the more extensive lowland areas near Naples, Rome, and Livorno (Leghorn) are the most important. The mountainous western coastline forms natural harbors at Naples, Livorno, La Spezia, Genoa (Genova), and Savona, and the low Adriatic coast permits natural ports at Venice (Venezia), Bari, Brindisi, and Taranto.

Sicily, separated from the mainland by the narrow Strait of Messina, has the Madonie Mountains, a continuation of the Apennines, and the Plain of Catania, the largest plain on the island. Mount Etna (3,369 m/11,053 ft) is an isolated and active volcano in the northeast.

Sardinia, in the Tyrrhenian Sea, is generally mountainous and culminates in the peak of Gennargentu (1,834 m/6,017 ft). The largest and most fertile plains are the Campidano in the south and the Ozieri in the north. The principal bay is Porto Torres in the Gulf of Asinara.

i thought this was a very helpful and useful article. i am doing a report on italy, and it was very acurrate information. it had good information about the topography and other stuff too. i just want to say thanks a bundle. keep the information coming.
14 year old school kid,
Jesse
2
Jesse

i thought this was a very helpful and useful article. i am doing a report on italy, and it was very acurrate information. it had good information about the topography and other stuff too. i just want to say thanks a bundle. keep the information coming.
14 year old school kid,
Jesse
3
Ari

thanks its really useful and i enjoyed this site!!!!!!
5
Cody

Thanks for the info it really helps! I've had to do a last minute cram Italian assignment and this has made it much easier. This site is great keep up the good work!
6
Marianna

The highest peak in the Appennini's chain is called "Corno Grande" (big horn) not "Corvo Grande" (big crow). Together with Corno Piccolo (little horn) it formes the mountain called Gran Sasso (big stone). This last one is the actual name used in Italian, while Corno Grande is an expression much more used by local people living in the Teramo province territory.
As far as the seismic activity is concerned, I would mention the earthquake that struggled L'Aquila (which is located at the foot of the western side of the Gran Sasso) on April 6th 2009, that has left nearly 300 people dead.
7
isael

im doing a project on italy and this info was very helpful to my assignment.
8
Marty

this article rocks, so helpful i am doing a report also on ITALY AND THIS GAVE ME JUST WHAT i need.
10
Alana

Very good but could use more info on bodies of water.