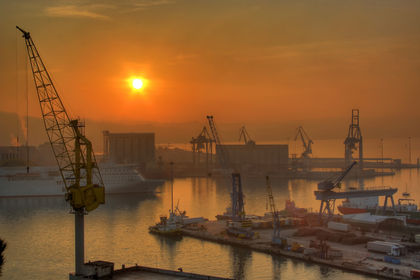 Characterized both by a few large industrial concerns controlling the greater part of industrial output and by thousands of small shops engaged in artisan-type production, Italian industry expanded rapidly in the postwar period. Industrial production almost tripled between 1955 and 1968 and has generally showed continued growth, although the global recession that began in 2001 slowed industrial production and the economy as a whole. The lack of domestic raw materials and fuels represents a serious drag on industrial expansion. Industry accounted for 30% of GDP in 2001, and employed 32% of the labor force.

Three state-holding companies have played a large role in industry: ENI (National Hydrocarbon Agency), IRI (Industrial Reconstruction Institute), and EFIM (Agency for Participation and Financing of Manufacturing Industry). IRI was the 16th-largest industrial company in the world in 1993, with sales of $50.5 billion; it had shareholdings in over 100 companies (including banks, electronics, engineering, and shipbuilding) and 333,600 employees in 1992. EFIM controls armaments and metallurgy industries. Debt-ridden EFIM was in the process of being dissolved in 1993. IRI became dismantled through sell-offs, and as of 2001, there were offerings of stakes in ENI. Major private companies are the Fiat automobile company; the Olivetti company (office computers and telecommunications); the Montedison chemical firm; and the Pirelli rubber company. The bulk of heavy industry is concentrated in the northwest, in the Milan-Turin-Genoa industrial triangle. The government has made concerted efforts to attract industry to the underdeveloped southeast.

With the drive toward greater European integration in full gear, Italy, along with its fellow EU member-states, is liberalizing its economic and commercial legislation. These promise a marked change in the Italian business scene as mergers and foreign investment increase. In early 1999, Olivetti mounted a successful hostile takeover for Telecom Italia.

your site helps me a lot especially in doing my projects. Thank you very much!

This helped me alot whilst doin a hwk project. Thanx x
3
XxRadKidxX

This helped me a lot with my geography project thanks!!! x
5
hobog

This site helped me alot when i had to do a prodution project. Thanx
8
Me a fan (:

You have a wonderful site , Thank you so much I love this site
9
katie

I REALLY UNDERSTOOD THIS ARTICLE IT HELPED ME A LOT WITH MY SCHOOL PROJECT AND I GOT A REALLY HIGH MARK
10
Just Another Kid (^:

Your site has really helped with my project. Thanks!
12
the one_345

This definetely helped me alot when i was doing a homework project! thankyou! :D
14
Max

Great :D this helped alot with my italy project, don't worry i named my source :)
15
Marah

This page helped me a lot with homework I was assigned. Thank you!
16
Erika

Thanks! This REALLY helped with my country project for Mr. Pejack's class. THANK YOU! ^_^