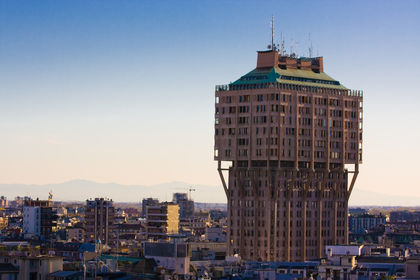 As the Italian economy, the world's sixth largest, has expanded since the 1950s, its structure has changed markedly. Agriculture, which in 1953 contributed 25% of the GNP and employed 35% of the labor force, contributed in 1968 only 11% of the GNP and employed only 22% of the active labor force—despite continued increases in the value of agricultural production. Agriculture's contribution to the GDP further declined to 8.4% in 1974 and 5% in 2001. Conversely, the importance of industry has increased dramatically. Industrial output almost tripled between 1953 and 1968 and generally showed steady growth during the 1970s; in 2001, industry (including fuel, power, and construction) contributed about 30% to the GDP. Precision machinery and motor vehicles have led the surge in manufacturing, and Italy has generally been a leader in European industrial design and fashion in recent decades. Services in 2001 accounted for approximately 68% of the economy.

Despite this economic achievement, a number of basic problems remain. Natural resources are limited, landholdings often are poor and invariably too small, industrial enterprises are of minimal size and productivity, and industrial growth has not been translated into general prosperity. The rise in petroleum prices during the mid-1970s found Italy especially vulnerable, since the country is almost totally dependent on energy imports. In addition, because economic activity is centered predominately in the north, Italians living in the northern part of the country enjoy a substantially higher standard of living than those living in the south.

Italy's large public debt, public sector deficit, low productivity growth, and burdensome and complex tax system, are generally blamed for the poor state of the economy. A rigid labor market and generous pension system are also seen as responsible for a sluggish economy. The Silvio Berlusconi administration by 2002 had abolished an inheritance tax, a move which was popular among affluent Italians. Tax cuts for low- and middle-income households were planned for 2003, and the corporate tax rate was reduced. Berlusconi also attempted to loosen labor laws to increase temporary work contracts and to ease hiring and firing practices. The government in 2002 was geared toward implementing spending cuts to spur consumer spending and corporate research and development. Pension reform, called a "financial time bomb" by economists, was proposed by the government and resulted in strikes in parts of Italy in mid-2003.

One of Italy's strengths is the thriving state of its small firms, which are often family owned. Out of a total of 35,000 joint stock companies, 13,000 have fewer than ten employees. These small businesses are able to succeed in niche markets. Italians spend more than other Europeans on clothes and shoes, and are second only to Spaniards in for spending in bars, restaurants, and hotels. Because many Italians rent their living spaces, expenditure on housing is low.

I agree with the thoughtful comments from Jenna, as the content of your site was engaging. I appreciated learning about the global relevance and fiscal strengths of my ancestors. Bravo!
2
Jacob

Your site provided detailed information needed for my upcoming presentation on the glory of Italy. My family has visited Israel often, but after reading many articles about Italy's amazing architecture and stunning landscapes, I am very anxious about my summer'08 trip to our world's sixth largest economy!
3
chelsea

this site was amazing. i am doing a travel and tourism project on italy's exports and economy and it helped me a lot!
4
Derek

this is just great thank you for the info about italy because im doing a parnther project and the person im working with is not that smart and does not do all of her work so thank you!
5
benny

that is really good it is amazing. it taught me alot of stuff about italy
6
ashley

This passage gave me a lot of info thanks. My partner and I love it thanks now i can finish this project my teacher gave me. So please put mmore info about different countries on their. See YA LATER
8
sasa

this site is great but i was wondering if you had any newer information on italy. all of the information is like form the 1990's. im wondering if anyone knows any other good sites like this???
9
christian

this website is good it is really good it helped me on social studies project i had to do it on Italy at north Schuylkill elementary
10
miguel , garza

this website gave me a lot of information this is the best website ever fpr italy!
11
hussain

this helped me so much on my project!! im doing it on the last minute
12
Madison