The Irish Transport System (Córas Iompair Éireann-CIE), a state-sponsored entity, provides a nationwide coordinated road and rail system of public transport for goods and passengers. It is also responsible for maintaining the canals, although they are no longer used for commercial transport. Ireland's railroads, like those of many other European countries, have become increasingly unprofitable because of competition from road transport facilities. There were 3,314 km (2,059 mi) of track in 2002. CIE receives an annual government subsidy.

A network of good main roads extends throughout the country, and improved country roads lead to smaller towns and villages. Ninety-six per cent of all inland passenger transport and 90% of inland freight are conveyed by road. Bus routes connect all the major population centers and numerous moderate-sized towns. In 2002, there were 92,500 km (57,480 mi) of roads, of which 87,043 km (54,638 mi) were surfaced. Automobiles in 2000 numbered 1,322,887 passenger vehicles and 213,822.commercial vehicles.

In 2002, Ireland's merchant fleet consisted of 26 vessels with a total of 110,741 GRT. The state-supported shipping firm, the British and Irish Steam Packet Co. (the B and I Line), is largely engaged in cross-channel travel between Ireland and the United Kingdom, providing passenger and car ferry services as well as containerized freight services, both port to port and door to door. The Irish Continental Line operates services to France, linking Rosslare with Le Havre and Cherbourg; it also runs a summer service between Cork and Le Havre. Brittany Ferries operates a weekly service between Cork and Roscoff. Other shipping 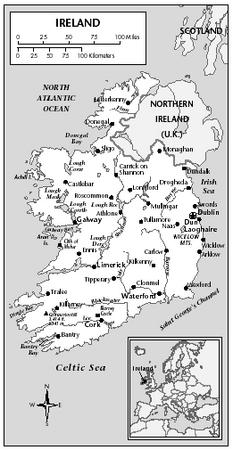 In 2001 there were an estimated 41 airports, 16 of which had paved runways. Aer Lingus (Irish International Airlines), the Irish national airline, operates services between Ireland, the United Kingdom, and continental Europe as well as transatlantic flights. Many foreign airlines operate scheduled transatlantic passenger and air freight services through the duty-free port at Shannon, and most transatlantic airlines make nonscheduled stops there; foreign airlines also operate services between Ireland, the United Kingdom, and continental Europe. The three state airports at Dublin, Shannon, and Cork are managed by Aer Rianta on behalf of the Ministry for Transport and Power. A domestic airline, Aer Arann Teo, connects Galway with the Aran Islands and Dublin. In 2001, 16,374,000 passengers were carried on scheduled domestic and international airline flights.

This is a terrific article. Very informative. What I'd like to know is what public transportation there is from Dublin or Shannan airports to Knock Shrine?

Any information you can provide will be most appreciated.

Very informable. But you should include a few more details.
Overall fantastic.
Regards,
Hal.