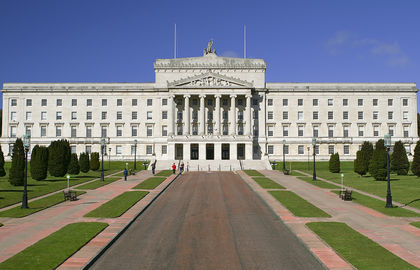 The major political parties are the Fianna Fáil, the Fine Gael, Labour, and the Progressive Democrats. Because the members of the Dáil are elected by a proportional representation system, smaller parties have also at times won representation in the Oireachtas. In 1986, Sinn Feìn, the political arm of the Provisional IRA, ended its 65-year boycott of the Dáil and registered as a political party winning one seat in the Dail in the 6 June 1997 elections.

Fianna Fáil, the Republican party, was founded by Éamon de Valera. When the Anglo-Irish Treaty of 1921 was signed, de Valera violently opposed the dominion status accepted by a close vote of the Dáil. Until 1927, when the government threatened to annul their election if they did not fulfill their mandates, de Valera and his followers boycotted the Dáil and refused to take an oath of allegiance to the English crown. In 1932, however, de Valera became prime minister, a position he held continuously until 1947 and intermittently until 1959, when he became president for the first of two terms. From 1932 to 1973, when it lost its majority to a Fine Gael–Labour coalition, Fianna Fáil was in power for all but six years.

Fine Gael is the present name for the party that grew out of the policies of Arthur Griffith, first president of the Irish Free State, and Michael Collins, first minister for finance and commanderin-chief of the army. W. T. Cosgrave, their successor, accepted the conditions of the 1921 treaty as the best then obtainable and worked out the details of the partition boundary and dominion status. This party held power from the first general election of 1922 until 1932. Since 1948, as the principal opponent of Fianna Fáil, it has provided leadership for several coalition governments. The policies of Fine Gael traditionally have been far more moderate than those of Fianna Fáil, although it was an interparty coalition government dominated by Fine Gael and Labour that voted Ireland out of the Commonwealth in 1948.

In the general elections of 24 November 1982 (the third general election to be held within a year and a half), Fianna Fáil won 75 seats, Fine Gael 70, and the Labour Party 16. Two members of the Workers' Party and three independents were also elected. Garret Fitz Gerald was elected taoiseach, heading a Fine Gael-Labour coalition. It was the second time in a year that he had replaced Charles J. Haughey of the Fianna Fáil in that office. In December 1979, Haughey had replaced Jack Lynch as head of his party and become prime minister.

The 1987 elections saw Fianna Fáil raise its representation to 81 seats, three short of an overall majority in the 27th Dáil. Fianna Fáil's proportion of the vote dropped to 44.1%, from 45.2% in 1982. Fine Gael won 51 seats in the 1987 contest; its 27.1% of the vote was 12.1 percentage points lower than in 1982. The Progressive Democrats, who had held 5 seats at dissolution, elected 14 representatives and took 11.9% of the vote. Labour won 12 seats (down 2) and 6.5% of the vote. The Workers' Party doubled its representation, from 2 to 4, and other parties elected 4 members. In a bitter contest, Charles Haughey was elected taoiseach and formed a minority Fianna Fáil government.

In the 6 June 1997 general election, a center-right alliance led by Bertie Ahern, leader of Fianna Fáil, defeated Prime Minister John Bruton's three party left-of-center coalition. Although Bruton's own party, Fine Gael, increased its share of the vote by3.5% winning 54 seats, its coalition partners, the Labour Party and the Democratic Left, both lost seats. Fianna Fáil won 77 seats outright, six shy of the 83 required for a majority. Other parties winning seats were Labor (17), Democratic Left (4), Progressive Democrats (4), Greens (2), Sinn Fein (1), Socialists (1), and Independents (6). Fianna Fáil joined with the Progressive Democrats and Independents to from a new government with Bertie Ahern as taoiseach (prime minister). In 1999, the Labour Party and the Democratic Left merged and the new party is called the Labour Party. The electoral significance of this realignment of the left is not yet clear, but the merger provides the Irish electorate with a more viable social democratic alternative to the governing coalition.