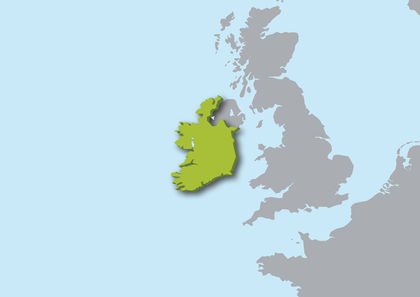 An island in the eastern part of the North Atlantic directly west of the United Kingdom, on the continental shelf of Europe, Ireland covers an area of 70,280 sq km (27,135 sq mi). Comparatively, the area occupied by Ireland is slightly larger than the state of West Virginia. The island's length is 486 km (302 mi) N – S , and its width is 275 km (171 mi) E – W . The Irish Republic is bounded on the N by the North Channel, which separates it from Scotland; on the NE by Northern Ireland; and on the E and SE by the Irish Sea and St. George's Channel, which separate it from England and Wales. To the W , from north to south, the coast is washed by the Atlantic Ocean.

I have been working on a report about Ireland and this is very useful.
2
Liz Garcia

This website was very helpful! I am doing a project for history and this website helped me out major!!! Thanks (:
3
joe

The size you have mentioned refers only to te republic of Ireland, not te entire Island. The island of Ireland is 84,431km sq or 32,599m sq
4
Jess

I just wanted to say that this information was very helpful. Thx :)
5
sarah

OMG this totally helped with geography homework! thank you! but it must be right
6
nana

I chose Ireland (because of Niall Horanâ™¥) and this was VERY helpful...I found what I need here! â™¥Thanks!â™¥
9
Hini Rajesh

This is very heplful,and it was very easy to understand,I got the exact location of Ireland.Thanks
10
Jason Malone

I am only 13 and I was doing research on Ireland, this is a very helpful sight, thank you very much.
11
Sky

I'm doing a report on Ireland (Niall Horan)in SOSE and this helped a whole bunch.TANKS!
12
ABC

Thanks joe!That information helped me alot because I am doing a report on Ireland.
13
Kaylee

This is very helpful! Im doing a report on Ireland (because of my husband, Niall Horan ) and this helped a lot! thanks!
14
nicki

thanks guys apreciate the help :P this is a really good place to find information expecially for someone so young like me
15
mahk

well im doing a repost on ireland and this is realy helpfull thanks :)
17
tml

Thanks! Great site! I'm only 12 and this sight was great, I'll be sure to use it again!
18
makenzie

I chose Ireland for my school project(because of Niall Horan) and this site was very helpful!!!Thanks:)
20
charlize

this website was really helpful because I am doing a project on my irish culture. we only have a week to do it and we need to do an oral report, a poster, and a family tree
21
Cooper Reagin

This website is so helpful... trust me.I've been doing a report on Ireland.
22
Dakota

This website was really helpful!!! Thank you. I love it so much
23
Tarzan

Thank you for helping me with my project about Ireland and the position it is located.
24
Nick

This is a great website to use. Still need more information.
25
kelvinwinners

This is very useful..on my research cos the information is gona help me alot in my project. God bless you thanks
26
Litten lover

Thank you so much this really helped with me geography.