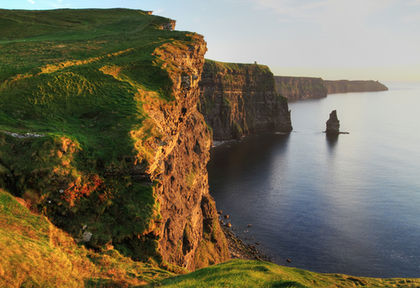 Ireland has an equable climate, because the prevailing west and southwest winds have crossed long stretches of the North Atlantic Ocean, which is warmer in winter and cooler in summer than the continental land masses. The mean annual temperature is 10° C (50° F ), and average monthly temperatures range from a mild 4° C (39° F ) in January to 16° C (61° F ) in July. Average yearly rainfall ranges from less than 76 cm (30 in) in places near Dublin to more than 254 cm (100 in) in some mountainous regions. The sunniest area is the extreme southeast, with an annual average of 1,700 hours of bright sunshine. Winds are strongest near the west coast, where the average speed is about 26 km/hr (16 mph).

Nice webste man one of my favorites in the whole wide web and im sure everyone else loves this website as their favorite!
2
bryauna galloway

thanks for helping me twice so far with my senior project! (on ireland) this is a great website thanks!
3
Justin

Thanks man!! Helped me a lot for my semester report on Ireland
4
jj

Hey thinks im in 5th grade and it helped me on my report!
6
LouisTomlinson

Thanks! This page will definitely help with my Social Studies report! :)
7
LouisTomlinson

Thanks! This website is now my Best friend for reports!
-LouisTomlinson