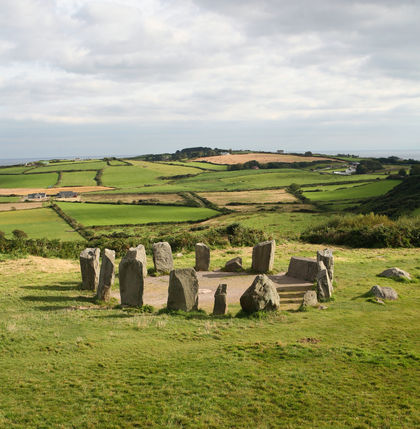 The government operates a comprehensive network of services within the framework of the Common Agricultural Policy, including educational and advisory services to farmers. Under a farm modernization scheme, capital assistance is provided to farmers for land development, improvement of farm buildings, and other projects, with part of the cost borne by the EU. In 1974, pursuant to an European Community directive, incentives were made available to farmers wishing to retire and make their lands available, by lease or sale, for the land reform program.

this site has alot of info i can use 4 my research papers now and for the future!
2
Scott

Thanks for the info this site was very helpfull for my project.
3
Kellen

Wow this is really useful! I have a research paper on Ireland im working on and this is the most helpful site i've found so far!
4
Haya

Thanks for the info this site was very helpfull for my project.
5
Mike Hawk

This site helped me on so many different levels!!! Thank You
6
WonderGirl

This is great!!! It was extremely useful and a great source. I'm making a brochure and reasearch paper so i used this site a lot.
7
I â™¥ Ireland

great info!! I used this site a lot!! it works for me. Thanks
8
Bob

Hey this is really cool. I got some info I NEEDED for a country report and TA DA! I found EXACTLY what I needed. You guys are good.
9
Tiffany

This came information was sort sweet and to the point I LOVED having this avalible for my reasearch project thanks!
10
jacob

wooow this site is great... i found a lot of infothat was really helpful... thanks for the info...
12
bob

i think its awesome and better than iceland. i dont have a problem from iceland i just think that irelands commerce is better then icelands. im so cool
13
jen

i love this page it helped me with my progect. i love this site alot thank you who made it
15
??????

Helped me so much. All the information is PERFECT for my project.
16
yo

perfect information, helped a lot for my research project!
17
rebecca

this site great!! it helps with my study guide because were not allow to bring the books home
18
bob

I hope that this stuff is still revelant this year because I really need it!!!
20
Nazir

A booming report - I was searching for Pre-feasibility Report for Organic Project. I got the required information. Great
21
jay

Thank you sooo much for all of the information!
I really needed it for a project
23
lincoln

Thank you whoever created this page, it is the most useful one i've found yet as I need some info for my project on Ireland.

thanks for the site. i had so much info for my project.
25
lianna

this site is awesome!i have loads of information for my project on ireland.
26
dominic

I luv Ireland and this will help meh pass my Elective report on Ireland!
28
Yeagernaut

I know that information is extremely helpful to my report. Yet again, I am eternally grateful!
29
Harry Styles

Thanks! I have a geography assignment on Ireland and this really helped!
30
Reuben

This gives me a good idea of the historic food sources, (except the potatoes) I am writing a fictional book where the character visits iron age Inisfail - Ireland.
32
Mason

I like Ireland because that's where the Lucky Charms guy comes from.
33
cheyenne

thank you this was very helpful to my project for school.
34
one direction

this is a wonderful website for reserch. this is a helpful site!
35
Andrew

Thank-you, this was very VERY helpful for my homework. :-D
36
Mohammed

from the information provided, it was observed that the countrys GDP is declining. what were the possible cause?
37
TouchType

Anjali my 'friend' was hopeless till she found this info then again shes always hopeless!!!
38
kaleb

This website is great!! Very helpful for research and reports! Thanks
40
cody

This site is great!!! i was using it for my research, thanks so much
41
my name is jeff

This site really helped me. I got this project and this is the best site so far
42
gaurav talreja

Hello sir/ma'am, i am an indian and looking forward to invest in agriculture in ireland can you please suggest me the best agriculture product for farming investment
43
Jayson

thnx for the info it helped alot i really like this site ;)
44
Adele

This website helped me a lot with my country report on ireland,thx alot
45
jsedd

This really helped me with my country report. Thanks so much!
47
Matthew

I could use more information in this article, like a list of the products and how much money they made for Ireland
50
Capt. Price

This helped so much with my project. I love Ireland and hope I can soon go there!!!
51
Herman

Good Morning
I am trying to get information regarding Agricultural in Ireland I am looking 4 a Chemical that has Mesotrione which is a pre-emergence and post-emergence
Any information you can either txt me or email
Would be greatly appreciate
hlittle3@yahoo.com
Thank you