Since 1984, Iceland's budget has shown a deficit averaging nearly 2% of GDP raising its net indebtedness relative to GDP to almost 30% in 1994. Government attempts to balance the budget were frustrated by the economic downturn during 1987–93 and by fiscal concessions to expedite wage settlements. Consequently, the deficit has been larger than expected reaching 34% of GDP in 1999.

The US Central Intelligence Agency (CIA) estimates that in 1999 Iceland's central government took in revenues of about $3.5 billion and had expenditures of $3.3 billion including capital expenditures of $467 million. Overall, the government registered a surplus of approximately $200 million. External debt totaled $2.6 billion. 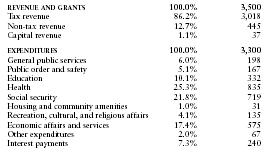