Iceland's first known settler, Ingólfur Arnarson, sailed from his native Norway to Iceland and settled at what is now Reykjavík in 874. During the late 9th and early 10th centuries, the island was settled by other Norwegians fleeing the oppressive rule of their king and by smaller groups of Scottish and Irish emigrants. In 930, a central legislative and judicial assembly, the Althing, was established, and a uniform code of laws for the entire country was compiled. Christianity was introduced in 1000, but the memory of the old pagan religion was preserved in 12th and 13th-century Icelandic literature. Many of the early settlers were great seafarers and continued their westward voyages of discovery and exploration from Iceland. Most famous of these were Eric the Red (Eiríkur Thorvaldsson), who discovered and settled in Greenland in 982, and his son Leif Ericsson (Leifur Eiríksson), who around the year 1000 discovered the North American continent, which he called Vinland ("wineland") because of the grapes he found there. Icelanders acknowledged the sovereignty of Haakon IV of Norway in a treaty of 1262, which established a purely personal union, ending the 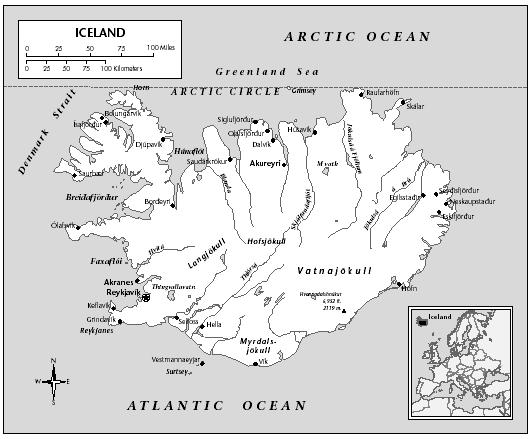 independent republic or commonwealth in Iceland. When all the Scandinavian countries came under the rule of Denmark at the end of the 14th century, Iceland became a Danish dominion. Lutheranism was introduced in the 1540s. Exclusive trading rights with Iceland were given in 1602 to a private Danish trading company. Danes had a complete monopoly of trade with Iceland until 1786, when trade was opened to all subjects of the kings of Denmark, including Icelanders.

The last decades of the 18th century were a period of economic ruin for Iceland, compounded by poor harvests, epidemics, and volcanic eruptions (notably that of 1783, the worst in Iceland's history); the population dwindled to 38,000 by 1800, less than half the number in the period of independence. In that year, the king abolished the Althing, long since reduced in power. Within a few decades, however, a nationalist movement had attained considerable strength, winning the reestablishment of the Althing (but only as an advisory body) in 1843, followed by the opening of trade with all countries in 1854. After a long constitutional struggle—led by a national hero, Jón Sigur<eth>sson, who was both statesman and scholar—limited home rule was granted in 1874, and almost complete home rule in 1903. By agreement with Denmark in 1918, Iceland was declared a free and independent state, but personal union with the Danish crown was retained. The Danish king continued to function as king of Iceland, and Denmark conducted Iceland's foreign affairs; but Iceland had the right to terminate this union after 25 years. Cut off from Denmark during World War II by the German occupation of that country, Iceland established diplomatic relations with the UK and the United States. British forces took over the protection of the island in 1940 and were replaced the following year by US troops that remained in Iceland until early 1947. In a referendum held in May 1944, more than 97% of those participating voted to end the union with the king of Denmark and, on 17 June 1944, Iceland became an independent republic. In 1946, it was admitted to UN membership. Three years later, Iceland became a party to the Atlantic Pact (NATO), and a bilateral defense agreement was signed in 1951 providing for a US military presence. In March 1970, Iceland joined EFTA, and a tariff agreement was ratified with the EC in February 1973. To protect its fishing industry, Iceland unilaterally extended its fishing zone in 1958, and again in 1972 and 1975, provoking conflict with the UK and other countries. Casualties resulted from the most serious outbreak of the "cod war" with the United Kingdom in late 1975 and in February 1976. An agreement ended the conflict in June 1976 and relations with the UK improved. Disputes over fisheries resources have also arisen with the Norwegians periodically, though both Norway and Iceland are united in their opposition to the international ban on whaling.

In 1985, the parliament unanimously voted to declare Iceland a nuclear-free zone, banning any deployment of nuclear weapons. Reykjavík was the scene of the October 1986 summit meeting between US president Ronald Reagan and Soviet leader Mikhail Gorbachev on arms control and nuclear disarmament.

Depressed world fish prices weakened the economy in the early 1990s, resulting in a no-growth GDP and higher unemployment. A number of factors have combined to reinvigorate the Icelandic economy. The government launched an austerity program to trim the Icelandic welfare state which included measures such as increasing the retirement age from 65 to 67 years of age (with future increases to age 70 envisioned). Icelanders are also being asked to pay for a greater portion of social services out of their own pockets. Demand in Europe and the United States for Icelandic fish has rebounded and fish exports account for 73% of exports and 50% of foreign earnings. Liberalization of many sectors of the economy such as telecoms and banking, required under the EEA (European Economic Area) agreement with the European Union in exchange for greater access to the EU market, has reduced public expenditures and positively affected governmental finances. By 1999, Iceland had experienced four years of more than 5% GDP growth, and purchasing power was increasing at four times the OECD average. Unemployment had dropped to 2%, and Iceland has dealt with its labor shortage by initiating labor immigration from the Philippines. The economic boom years from 1996–2001 slowed in 2002, and Iceland experienced a mild recession. Growth of GDP was forecast at 2.1% in 2003 and 3.5% in 2004.

Iceland was in the international headlines at the end of 1998 for altogether different reasons. In December 1998, the Icelandic parliament agreed after two full revisions of the legislation to create a health database of medical records of all Icelanders for use by a private company seeking to decode the human genome. Iceland's isolated, homogeneous population is a boon to medical researchers seeking to decode the genetic sequences of many hereditary diseases, but the lack of informed consent by individuals in the legislation became a heated political issue.

A public opinion poll taken in June 2002 indicated a 50–50 split between supporters and opponents of EU membership. However, conservative Independence Party leader Daví<eth> Oddsson, prime minister since 1991, remains resolutely opposed to EU membership, stating in 2002 that Iceland's affairs should not be dictated by conditions in "Paris or Berlin."

thank you guys you gave me the important info i needed for my project I really appreciate your services!
2
Jerry

Thank you for the information. I am trying to decide what to do my project on and this has helped very much. It looks like a "cool" place!