The difference between imports and exports since World War II has been met by drawing from large wartime reserves, by Marshall Plan aid, and, since 1953, by income from US defense spending at Keflavík, the NATO airbase. Widely fluctuating current account deficits, attributable mainly to the trade imbalance, averaged more than 6.5% of GNP during 1971–75. During the next four years, although still largely negative, the current account balance improved; from 1980 through 1985, however, Iceland's current accounts position again deteriorated, this time because of large deficits in services. Iceland suffered a prolonged recession during 1987–93 due to cuts in fish catch quotas necessitated in part by overfishing. Again, there was a significant deterioration in the balance of payments, especially on the current account and merchandise trade balances. In 1994 the economy recovered with the help of a 6.3% growth in exports, due to a better than expected performance in the fishing sector. The external current account balance was positive for the first time since 1986. Iceland experienced successful economic performance in the 1990s but fell into recession in 2001, which negatively impacted the current account deficit.

The US Central Intelligence Agency (CIA) reports that in 2002 the purchasing power parity of Iceland's exports was $2 billion while imports totaled $2 billion resulting in a trade surplus of $0 million.

The International Monetary Fund (IMF) reports that in 2000 Iceland had exports of goods totaling $1.9 billion and imports totaling $2.38 billion. The services credit totaled $1.05 billion and debit $1.16 billion. The following table summarizes Iceland's balance of payments as reported by the IMF for 2000 in millions of US dollars. 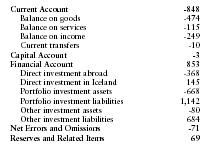