In recent years, the government has presented its budget bill to the National Assembly sometime during the first several months of the year, but the budget itself becomes effective on 1 January, when the fiscal year begins. It is prepared by the Ministry of Finance. Although Hungary had one of the most liberal economic regimes of the former Eastern bloc countries, its economy still suffered the growing pains of any country trying to come out of communism and privatize its industries. The last few years, however, Hungary has enjoyed a remarkable expansion, averaging annual GDP growth of 4.5% between 1996 and 2002. Inflation in that period dropped from 28% to 7%, and unemployment fell to 6%, less than most EU countries. Eighty percent of GDP is now produced by privately-owned companies. Still, Hungary's foreign debts remain large, putting a damper on the economy's otherwise spectacular performance. 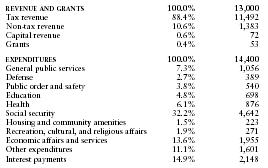