The state budget includes ordinary revenues and expenditures and a special investment budget administered by the Ministry of Coordination. The public sector, which employs 15% of the workforce, has many more civil servants than required for a country the size of Greece. Public payrolls, liberal social security benefits, and loss-generating state owned companies have all contributed to a government deficit. Recent austerity measures implemented to meet the criteria for European Monetary Union membership significantly lowered the budget shortfall. 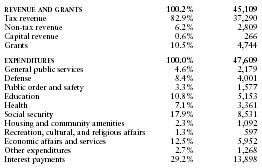