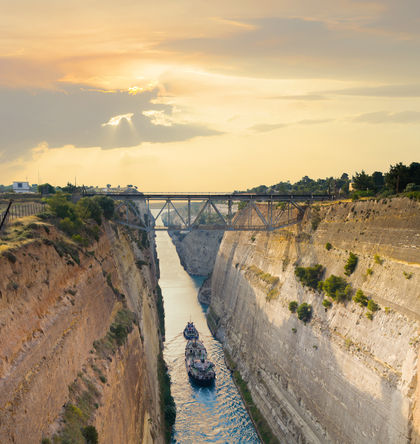 Manufacturing, which now ranks ahead of agriculture as an income earner, has increased rapidly owing to a vigorous policy of industrialization. However, Greek industry must rely on imports for its raw materials, machinery, parts, and fuel. Greece has only a rudimentary iron and steel industry and does not manufacture basic transport equipment, such as cars and trucks. Industry is concentrated in the Athens area.

Chief industries in 1995 accounted for the following proportions of manufacturing's share of the GDP: food, beverages and tobacco, 25%; metals and metals manufactures, machinery and electrical goods, 17%; chemicals, 13%; textiles, 18%; nonmetallic minerals, 6%; and transport equipment, 4.3%. Although the government controls certain basic industries, such as electric power and petroleum refining, most industry is privately owned. The portion of government-controlled industries is declining as the state divests itself of substantial control over key holdings such as Olympic Airways and the telecommunications company, OTE.

A cool article very good and helped me with my project
2
Tay(:

Thanks so much really helped me with my final for world geo.
3
g

Thanks for the help on my report! I needed this for world history!
4
melanie

This article is awesome!! It helped soo much!! I was looking everywhere for information like this, and I'm glad I finally found it
5
brydeen

thanks for helping my with my project it helped me alot :)
6
Queen>Barbie

This article helped me a lot with my project. Thanks a lot! Bye!
7
Esther

Thankx so much. It has helped me so much on my project that i probably will get an A++. I really enjoyed reading it and learning about Greece. This article should be posted everywhere
8
savon

thank you for this information,it has helped alot :)
12
cjc

THIS ARTICLE REALLY HELPS. IT TALKS ABOUT THE GREEK INDUSTRY AND HELPS ME PERSONALLY. I NEEDED IT FOR MY I.T.C CLASSES.
13
tdb

i need the major industries in greece. and this major export products.
17
Lexi

This really helped me! Thank you so much!! I needed this for my World Geography class.
18
Tykeia

This helped me alot i needed this for my World Geography class thank you!!!
19
23 jordan

thanks alot this really helped me on my project in english(:
20
Mac

Wow! This really helped me for my project in my geography class!
21
jose

thanx so much it really helped me out with my project!!!
22
Michael

Good article it really helped in my geo class learning about the Greeks industrial region! Thanks ! :)
23
Vipul Sharma

Thank you so much! I needed this for my World Fair Project
27
BUGatti_Chiron

Wow, this helped a lot for my geography homework research. Thanks so much!