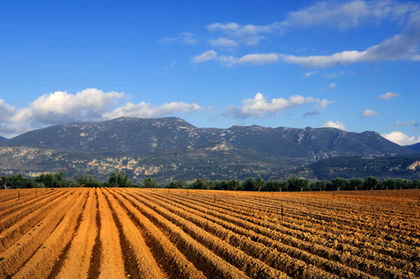 Agriculture in Greece suffers not only from natural limitations, such as poor soils and droughts, but also from soil erosion, lack of fertilizers, and insufficient capital investment. The total agricultural workforce was 794,000 people in 1999.

About 30% of the land area is cultivable, and it supports over half of the population. Of the land under cultivation in 1998, about 72% was planted in seasonal crops, and 28% in orchards and vineyards. About 36% of the agricultural land was irrigated in 1998. Although agriculture accounts for 20% of the work force, its role in the economy is declining; in 2000 agriculture accounted for 9% of GDP, down from 25% in the 1950s.

Progress has been made toward modernization in machinery and cultivation techniques. Agricultural products, including processed foods, beverages, and tobacco, make up one-third of total exports. To expand agricultural production and encourage farm prosperity, the government exempts agricultural income from most taxes, extends liberal farm credits, and subsidizes agriculture. It also operates a service by which individual growers or cooperatives may hire heavy farm equipment at low prices, encourages the development of industries that use farm products, provides educational programs, and has sought to halt the trend toward ever-smaller farm holdings. More than 241,000 tractors, 5,500 harvester-threshers, and 14,600 milking machines were in use in 1998.

this website is great. there's great information but it could be more spacific and include the major agricultural products. Also, if you add some more details about greece like the economic activities ( how agriculture fits in that.) or major imports. Just trying to help... please DO NOT take me wrong..
2
Toni Pugh

I have a speech and project too do on greece this is helping
5
lyssa jay (:

Thanks ; to whoever took the time to put all these facts together.
They really helped me.
Love, â™¥ lyssa!
6
MT

Are we allowed to copy and paste? JK! This website really helped me with a project i have on Greece!!!
8
:) Thanks!

Do you people know how to spell? Spacific? Really dude? Anyway...this was very helpful to me and I believe that I may do okay on my project now! THANKS
9
annie

Thanks this helped so much. I got an A on my project yay!!! lol Thanks again
12
mer hugs

i love this website to the m,oon and bakc and i want to scream it from gthe rooftops!!
13
britt

Didnt really help, but overall decent information. Not specific for my project but information well written.