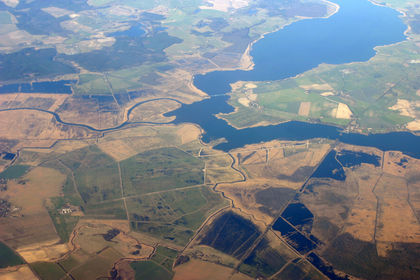 The topography of Germany is varied. The area along the Baltic coast is sandy, with dunes and small hills. Adjacent to the coast are forested ridges and numerous lakes of the Mecklenburg lake plateau. Around Berlin, the relief is less hilly. The southern limit of the lowland area is formed by a wide zone of fertile loess, reaching from Magdeburg to the highlands in the South. These highlands include the Harz Mountains; the densely wooded Thuringian Forest and the Erzgebirge (Ore Mountains), where the Fichtelberg rises to 1,214 m (3,983 ft). In the northeast, the wide German lowland—characterized by sandy North Sea shores, heath and moor (in the South), and highest altitudes of about 300 m (1,000 ft)—rises slowly to the central Germany uplands. These low, eroded mountains (1,070–1,520 m/3,500–5,000 ft) extend from the Rhine to the former border of East Germany. In the West are a wide rift valley and a narrow gorge carved by the Rhine River. A group of plateaus and low mountains, averaging 460 m (1,500 ft) in altitude and including the Black Forest and Odenwald Mountains (highest peak, the Feldberg, 1,493 m/4,898 ft), form the greater part of southern Germany. They merge gradually with the highest walls of the Bavarian Alps (2,440–2,740 m/8,000–9,000 ft), which form the boundary between Germany, Switzerland, and Austria; the Zugspitze (2,962 m/9,718 ft), on the Austrian border, is the highest point in Germany.

The only major lake is Lake Constance (Bodensee; within Germany, 305 sq km/118 sq mi), which is shared with Switzerland and Austria. Except in the extreme south, all of Germany is drained by rivers that empty into the North Sea. The Rhine, with its two main tributaries, the Mosel and the Main, dominates the western areas; farther east are the Ems, the Weser, the Elbe, and the Oder. These rivers have estuaries that are important for the ports located there. In the South, the Danube flows from west to east. The East Frisian Islands are off the northwest coast; the North Frisian Islands lie along the coast of Schleswig. The small island of Helgoland is opposite the mouth of the Elbe River.

i'm duing a report on germany and this is the only website i used.
2
i_love_caroline

this is awsome! thanks for putting it on! awsome :D
3
Someone

this topography really helped me.. last minute report.. haha. (: thanks so much. (: i really needed this
5
B.M.K

I have a history project on Germany and I think this will help me so muj! Thanks!
6
Hi

This website helped me so much for my speech on friday ^o^
Thanks!
7
BLA BLA BLA

This helped a lot. Thank u :) I have been looking a lot and never found any thing until now.
8
Brandan

This helped a lot on my report. Thank you. (Some people on that commented on this need to learn how to spell.)
9
Aloha

this helped me greatly with my last minute geography project i had to do :).