The 1967 Law for the Promotion of Economic Stability and Growth requires the federal and state governments to orient their budgets to the main economic policy objectives of price stability, high employment, balanced foreign trade, and steady commensurate growth. The Financial Planning Council, formed in 1968, coordinates the federal government, states, municipalities, and the Bundesbank in setting public budgets. Income, corporate turnover, mineral oil, and trade taxes account for more than 80% of all tax revenue, with the federal government controlling just under half of it. Since the 1960s, social insurance provisions have accounted for the largest share of federal expenditures.

Germany's reunification in 1990 raised special problems with regard to economic and financial assimilation. The Unification Treaty provided that the new states should be incorporated in the financial system established by the Basic Law as much as possible from the onset. Therefore, since 1991, the new states have basically been subject to the same regulations with regard to budgetary management and tax distribution as the western states. A "German Unity Fund" was initiated to provide financial support for the new states (and their municipalities); it is jointly financed by the western states, with most of the money being raised in the capital market. 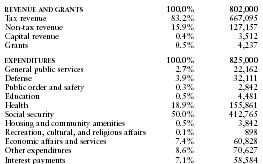