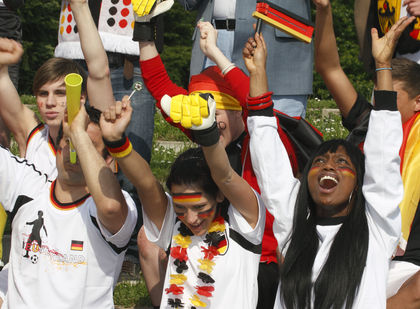 Until the late 1950s, the population was 99% German; the Danes in Schleswig-Holstein were the sole national minority. The influx of foreigners as "guest workers" beginning in the late 1950s led to an upsurge in the number of permanent foreign residents. Germans constituted 91.5% of the total population in 1998. Of the foreigners in Germany, Turks were by far the largest group, numbering 2.4% of the population. Italians accounted for 0.7%; Greeks for 0.4%; Poles made up 0.4%; and various other groups—made up largely of people fleeing the war in the former Yugoslavia—made up the remaining 4.6%. Even persons born and reared in Germany are considered foreigners unless ethnically German or naturalized.

As joblessness increased in the 1980s and early 1990s, tensions arose between minority residents and young working-class youths, described as skinheads, who were influenced by neo-Nazi propaganda. This was true even in the former GDR.

hi i like it cause it helped with docial studies project.
2
Dave! Yogpod

This actually helped a lot on the ethnics slide of my grade eleven social project. thanks, yo!
3
Jasmine

Thanks useful for my 6th grade end of year social stidies project :)
4
hannah

it helped me just a little bit on my 9nth grade social studies project!!
5
devon

it helped me with my 8th grad social stides project and i got an A:)
6
Kenna

This really helped me on my 9th grade essay. Thanks!
7
Konata

Its kinda helpful for my 8th grade SS project. I'd better get a good grade.
8
Paige Platt

it is great it is helping me with my school project we are makeing a website. i will have to go here again on another school project. i love this cite! ;)
9
Jack

So would Germany be a multi-state nation due to the high population of germans spread throughout Germany and Austria?
10
Mamah uchenna

Thank you, this article helped quite a bit. This will come of use later.
12
Heidy