After experiencing deficits during 1979–81, the FRG's current accounts balance rebounded to a surplus of about DM 9.9 billion in 1982 and then kept rising to DM 76.5 billion in 1986, primarily because of falling prices for crude oil and other imports, combined with appreciation of the deutsche mark relative to other European currencies. By 1989, Germany's current account surplus was nearly 5% of GNP. With reunification, however, this changed immediately. Imports rushed in as former-GDR residents sought newly available consumer goods, and exports fell as goods and services were diverted to the east. As a result, Germany recorded current account deficits since 1991, created in part because of the substantial foreign borrowing undertaken to finance the cost of unification. Even so, large current account surpluses from the 1970s and 1980s helped Germany to maintain its position as the world's second-largest creditor with net foreign assets estimated at $185 billion in 1995. From 1990 to 1996, however, Germany's share of world exports dropped from 12% to 9.8% due in large part to high labor costs which were making it hard for Germany to compete in the global economy. Germany in 2001 ranked second behind the US in numbers of both exports and imports, and ran a current account surplus.

The US Central Intelligence Agency (CIA) reports that in 2002 the purchasing power parity of Germany's exports was $608 billion while imports totaled $487.3 billion resulting in a trade surplus of $120.7 billion.

The International Monetary Fund (IMF) reports that in 2001 Germany had exports of goods totaling $570 billion and imports totaling $481 billion. The services credit totaled $88 billion and debit $138 billion. The following table summarizes Germany's balance of payments as reported by the IMF for 2001 in billions of US dollars. 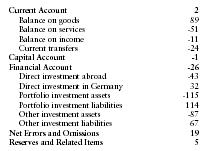