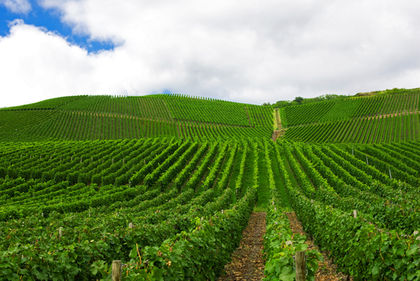 Article 15 of the 1990 Treaty (for monetary, economic and social union) arranged for transitional price supports for GDR farmers until an integration within the EU agricultural market could occur. Before reunification, agriculture had engaged about6.1% and 3% of the economically active populations of the former GDR and old FRG, respectively. Agriculture engaged 3% of Germany's population in 2001. The former GDR Länder contribute significantly to German agricultural production. The chief crops in order of yield in 1999 were sugar beets, 27,587,000 tons; wheat, 19,684,000 tons; barley, 13,322,000 tons; and potatoes, 11,420,000 tons. Apples and pears as well as cherries and peaches are significant fruit crops. Viticulture is important in the southwest, and Germany is a renowned producer of wines for world consumption; 1,229,000 tons of wine were produced in1999. Germany is the world's third largest importer of agricultural products (after Japan and the United States), with nearly $32.2 billion in 2001.

I really loved this website!! i was doing a report on germany, and I mainly used this website. I really like the topics, and you just click which topic you want, and it is really informational, and I kinda juts copied and pasted to micrsosft word, and then put it in my own words. I had to do so many topics, and I only have two more... I think on this website you should add Attractions,Art/Music, and Attire. Other then that, this site REALLY helped me with my report.
3
annonomos

this website isnt very informational! i mean cmon i was trying to do a report on mexico so i thught germany had something to do with it and it didnt work
5
joe wesly

hello.
This is a great site ?
thanks for helpin with geography project
7
Samantha Lanko

Thanks this helps a lot. I have noticed a lot of sites don't contain this kind of information. Espcially for projects in school.
9
all

really loved this website. It really helped me with my project. Thanks
13
Ivy

Thanks good info. Helped me on my project for Germany.
14
poop

this is a very good article it is also pretty good for doing a report i am doing a repot in fact.
15
Tim

This REALLY helped me with my history project. I had to answer so many questions about Germany, this website REALLY helped me out. I didn't know half of the questions until I came to this website! Thank you so much for helping with my project! Found a lot of info on this site thanks this is a great site for anyone.Thanks this helps a lot. I have noticed a lot of sites don't contain this kind of information. Espcially for projects in school.
17
dani david