France has one of the most highly developed transportation systems in Europe. Its outstanding characteristic has long been the degree to which it is centralized at Paris—plateaus and plains offering easy access radiate from the city in all directions, and rivers with broad valleys converge on it from all sides. In 2002, the road network of 892,900 paved km (554,848 mi) included 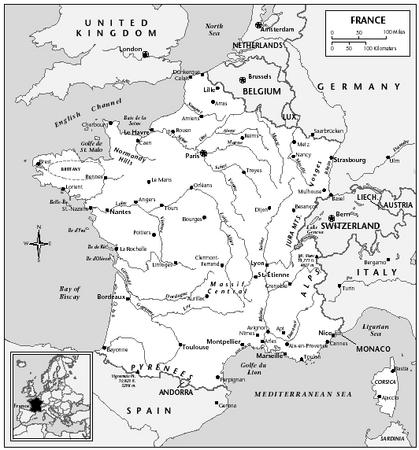 All French railroads were nationalized in 1938 and are part of the national rail network Société Nationale des Chemins-de-Fer Français, 51% of whose shares are controlled by the government.

As of 2002 there were 31,939 km (19,847 mi) of railway track, of which about 14,176 km (8,809 mi) were electrified. Le Train à Grande Vitesse (TGV), the fastest train in the world, averaging 250 km (155 mi) per hour over most of its run, entered service between Paris and Lyon in 1981. TGV service between Paris and Lausanne became fully operational in 1985. The TGV set another world speed record on 18 May 1990 with a registered speed of 320.2 mph (515.2 kph). The Paris subway (métro), begun in the early 1900s but extensively modernized, and the city's regional express railways cover a distance of 472 km (293 mi). The métro has over one million passengers a day; Parisian bus lines carry about 800,000 passengers daily. Other cities with subways are Marseille, Lille, and Lyon, with construction underway in Toulouse.

Two high-speed rail tunnels under the English Channel link Calais and Folkestone, England (near Dover). The 50-km (31-mi) project by Eurotunnel, a British-French consortium, was completed in 1993. From these terminals, people can drive their cars and trucks onto trains which can make the underground trek in about thirty minutes. Rail lines that run through the tunnel include Le Shuttle, which provides both freight and passenger service, and Eurostar, a high-speed passenger-only line. In November 1996 a truck aboard a Le Shuttle train caught fire in the tunnel, causing extensive damage but no loss of life. Service was partially restored within weeks of the incident and full repairs were completed by the following May.

France, especially in its northern and northeastern regions, is well provided with navigable rivers and connecting canals, and inland water transportation is of major importance. In 2002, there were about 6,969 km (4,331 mi) of navigable waterways in heavy use of the 14,932 km (9279 mi) of waterways. The French merchant marine, as of 2002, had a total of 49 ships with 1,000 GRT or over and a total capacity of 1,263,691 GRT. Kerguelen, an archipelago in the French Antarctic Territory, offers an offshore registry program which is less regulatory than official French registry. The leading ports are Marseille, Le Havre, Dunkerque, Rouen, Bordeaux, and Cherbourg. Other important ports include Boulogne, Brest, Fos-Sur-Mer, Sete, and Toulon. More than half of freight traffic to and from French ports is carried by French ships.

In 2001 there were an estimated 477 airports in France, of which 273 had paved runways. France's national airline, Air France, is government subsidized. It operates regularly scheduled flights to all parts of the world. The Concorde, jointly developed by France and the United Kingdom at a cost of more than £1 billion, entered regular transatlantic service in 1976. There are two major private airlines: the Union des Transports Aériens, which provides service to Africa and the South Pacific, and Air Inter, which operates within metropolitan France. The two international airports of Paris, Charles de Gaulle and Orly, both located in Paris, lead all others in France in both passenger and freight traffic. In 2001, 50,816,500 passengers were carried on scheduled domestic and international air flights.

its imazing to know all this. its its realy very mysterious.
2
sofia

thank god i found this website, this entire website has helped me so much on my geography report i am eternally grateful