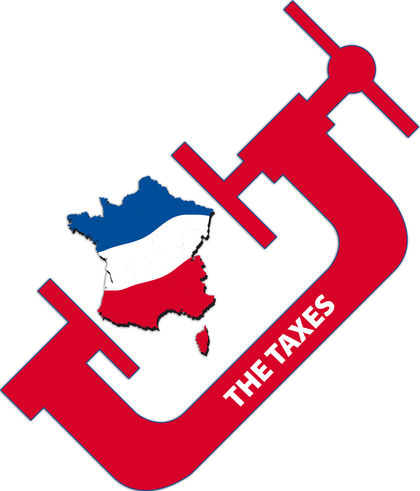 Individual income tax in France is assessed in accordance with a progressive schedule of statutory rates ranging from 0% (up to €4,121in 2002) to 52.75% (in 2002, on the increment of annual income above €46,343), with intermediate brackets of 7.5%, 21%, 31%, 41%, and 46.75%. French tax law contains many provisions for exemptions and targeted reductions from taxable income, so that the actual income tax paid is highly individualized. According to a 2002 OECD report, the disposable income of the average production worker was 73.2% of gross pay, and 79% of gross pay for a single-earner married couple with two children. Non-industrial businesses that do not pay value-added taxes on consumption (banks, insurance companies, the medical sector, associations, non-profit organizations, etc.) pay a wage tax to cover social levies assessed according to a three-bracket progressive schedule: 4.25% on the portion of annual wage below €6,460; 8.5% on the portion between €6,460 and €12,900, and 13.6% on the portion above €12,900. Inheritance taxes (succession duties) range from 5% to 60%, as do gift (donations) taxes. There is also a patrimonial tax of 3% on the fair market value of property owned in France, although foreign companies whose French financial assets are more than 50% are exempt. Also, foreign property holders may be exempt according to the terms of a bilateral tax treaty with France. (France is party to a numerous bilateral tax treaties with provisions that can greatly reduce tax liabilities for foreign investors.) Local taxes include a property tax, charged to owners of land and buildings, and a housing tax, charged to occupants of residential premises, assessed according to the rental value of the property. The social security system is operated separately from the general tax system, financed by contributions levied on earned income in accordance with four regimes: a general regime covering 80% of French citizens, a regime for agricultural workers, a special regime for civil servants and railway workers, and a regime for the self-employed. Tax levies have been used, however, to shore up the finances in the social security system.