Postal, telephone, and telegraph systems are operated by the government under the direction of the Ministry of Post, Telegraph, and Telephones. In 1998 there were 34.8 million main line telephones in use, with an additional 11 million mobile cellular phones.

The government-controlled Office de Radiodiffusion-Télévision Française was replaced in January 1975 by seven independent state-financed companies. A law of July 1982 allowed greater independence to production and programming organizations. Under deregulation, many private radio stations have been established. Of the three state-owned television channels, TF-1, the oldest and largest, was privatized in 1987; a fourth, private channel for paying subscribers was started in 1984. Contracts were awarded in 1987 to private consortiums for fifth and sixth channels. As of 1999 there were 41 AM and 800 FM radio stations (many of the FM stations were repeaters) and 310 TV stations. In 2000, there were 950 radios and 628 television sets per 1,000 people. The same year, there were about 304 personal computers for every 1,000 people, with 62 Internet service providers serving about 11.7 million users.

Traditionally, the French press falls into two categories. The presse d'information, which newspapers with the largest circulation, emphasizes news; the presse d'opinion, usually of higher prestige in literary and political circles but of much lower daily circulation, presents views on political, economic, and literary matters. In 2002, there were over 100 dailies in the country. Some of the important regional papers rival the Parisian dailies in influence and circulation.

The following table lists the estimated average daily circulation in 2002 of the leading newspapers: 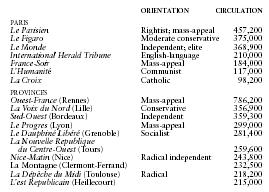 The Agence France-Presse is the most important French news service. It has autonomous status, but the government is represented on its board of directors. There are some 14,000 periodicals, of which the most widely read is the illustrated Paris-Match, with a weekly circulation (in 1995) of 868,370. Several magazines for women also enjoy wide popularity, including Elle, (1995 circulation 360,000). Also for women are magazines publishing novels in serial form. The most popular political weeklies are L'Express (left-wing), with a circulation of about 419,000; the satirical Le Canard Enchaîné (left-wing), circulation 500,000; Le Nouvel Observateur (left-wing), circulation 399,470; and the news-magazine Le Point (independent), circulation 280,770. Filmmaking is a major industry, subsidized by the state.

The law provides for free expression including those of speech and press, and these rights are supported by the government.