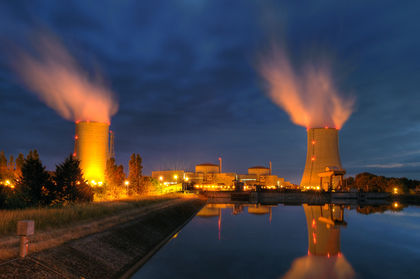 Industry has expanded considerably since World War II, with particularly significant progress in the electronics, transport, processing, and construction industries. France is the fourth-leading industrial power, after the US, Japan, and Germany (although France was surpassed by the United Kingdom in 2001 as the world's fourth largest economy). In 2002, the industrial sector accounted for 26% of GDP and around 25% of the labor force. Manufacturing accounted for 16%, construction 4%, and energy generation 3% of GDP in 2001. Manufacturing accounts for around three-quarters of total exports of goods and services, which amounted to 29% of GDP in 2000. The state has long played an active role in French industry, but government involvement was greatly accelerated by a series of nationalization measures enacted by the Socialists in 1982. By 1983, about one-third of French industry—3,500 companies in all—was under state control. However, there was some privatization during 1986–88, later resumed in 1993, with 21 state-owned industries, banks, and insurance companies scheduled to be sold. Although substantial progress had been made in privatization in 2001, the government still controlled such industries as aeronautics, defense, automobiles, energy, and telecommunications.

The steel industry, which employed some 77,300 workers in 1991 (down from 156,000 in 1979), suffered from the impact of worldwide recession in the early 1980s. In 1995, production totaled 18 million tons of crude steel, placing France 11th in world production. Production has been down by a third since 1994 because of international competition and a general shift away from steel to aluminum and plastics. The French aluminum industry is dominated by a factory in Dunkirk owned by Pechiney, which was privatized at the end of 1995.

In 1995, the French automotive industry, ranked fourth in the world, directly employed 350,000 workers and contributed indirectly to almost 2.6 million jobs. Over 3,628,000 passenger cars were produced in 2001, and over 55,000 commercial vehicles were produced in 2000. The two leading companies are PSA (which controls the Peugeot and Citroen brands) and Renault, the latter state-owned. Approximately 60% of production is exported helping the automotive industry to post a $6 billion trade surplus in 1995. The domestic market, however, has fallen pray to foreign competitors, especially from Germany and Japan, forcing the French auto makers to make greater use of robots, layoff workers, and open plants abroad.

The French aircraft industry, not primarily a mass producer, specializes in sophisticated design and experimental development. Some of its models, such as the Caravelle and the Mirage IV, have been used in over 50 countries. Aérospatiale, among the world's leading makers of commercial aircraft, became a state company after World War II. The Airbus program dominates civil aeronautics.

The chemical industry, although not as strong its rivals in Germany and the US, ranks fourth in the world employing nearly 300,000 and generating over $70 billion in revenues.

In 1994, the pharmaceuticals, perfume, and cosmetics industry employed 195,000, and posted a trade surplus of $6.4 billion. The electrical and electronics industry employed 330,000 workers in 1994 and had a turnover of $59.2 billion. The textile industry employed 300,000 workers in 1994. The food processing industry is a major force in the French economy, producing a considerable trade surplus of $6.2 billion in 1995. Cooperative ventures are particularly important to the food industry, representing 16% of turnover and 11% of food industry jobs. Trade surplus in dairy products was $2.6 billion in 1995. In 1994, France produced 54.6 million hectoliters of wine, making it the world's second-largest producer after Italy.

The great concentrations of French industry are in and around Paris, in the coal basin of northern France, in Alsace and Lorraine, and around Lyon and Clermont-Ferrand. French industry, in general, is strong on inventiveness, inclined toward small-scale production of high-quality items, and reluctant in many branches to adopt modern methods of mass production. The French government offers subsidies and easy credit to firms undertaking relocation, reconversion, or plant modernization.

thanks so much, I use this site alot becuase i have a huge report in france!
2
Megan

Thank you, this site was very helpful for my project.
3
Miss.Overworked

Thanks, it didn't help much but it is full of information (I just don't need it.).
4
carry

OMG OMG OMG!!!! Thanks soooo much for this site. I have this HUGE history report to do on france. THX THX THX
5
marie antoinette

this has been great help for my social studies project. i believe this information is quite accurate. thank you.
6
ciara

this is really good but i suggest you tell us the location.it is for my project
7
Dhruv

omg!! this was a huge help!! i have a geography project due tomorrow and i so needed this to finish it!! THANKS!!
9
chicilate

good. love this website
i hope i can find more like this one cuz im doin a research
10
andy

This really helped for my French Power Point, (If only I could copy and paste it... curse you copy right laws :P)

No, but thanks all I need on One Website, Whoever wrote and created this page, I salute you, you have my thanks and respect! :3
12
guser74

thanks alot man this was totally helpful for a paper i had to write.
13
Thariq

This information was so helpful for my project, anyway thanks a lot!
14
Rosalie

Thanks so much! I really needed information on France's Industry! thanks, again! (for my project)