Between 1945 and 1958, France had a constant deficit in its balance of payments. The deficit was financed by foreign loans and by US aid under the Marshall Plan, which totaled more than $4.5 billion. A 1958 currency reform devalued the franc by 17.5%, reduced quota restrictions on imports, and allowed for repatriation of capital; these measures, combined with increased tourist trade and greater spending by US armed forces in the franc zone, improved France's payments position. With payments surpluses during most of the 1960s, gold and currency reserve holdings rose to $6.9 billion by the end of 1967. However, a massive deficit in 1968 led to another devaluation of the franc in 1969, and by 31 December 1969, gold and reserve holdings had dropped to $3.8 billion. After surpluses in 1970–72 raised international reserves to over $10 billion, price increases for oil and other raw materials resulted in substantial negative balances on current accounts in 1973 and 1974; because of this, France required massive infusions of short-term capital to meet its payments obligations. Huge surpluses on the services account led to positive payments balances during 1977–80, when reserves rose by nearly $9.7 billion. After that, France's trade position deteriorated sharply. Foreign exchange reserves fell from $27,759 million as of March 1981 to $14,123 million by March 1983. To meet its payments obligation, France had to secure a $4 billion standby credit from international banks as well as loans from Sa'udi Arabia and the EC. During the mid-1980s, the trade deficit generally moderated; the current accounts balance recovered in 1985 from the heavy deficits of the past.

In 1992, the merchandise trade account recorded a surplus of Fr31 billion, a large swing from the Fr30 billion deficit of 1990. Trade in industrial goods (including military equipment) and a surplus in the manufacturing sector (the first since 1986) were responsible for the boost in exports. Economic growth rose throughout 1994 due to exports to English-speaking countries and a strong economy in Europe. Exports of both goods and services significantly contributed to GDP growth in 1995 with exports of goods totaling $270,400 million and imports totaling $259,225 million, resulting in a trade balance on goods of $11,175 million. Exports of services totaled $97,770 million while imports totaled $78,530 million, resulting in a balance on services of $19,240 million.

Although France in recent years has run consistent trade and current account surpluses, the country's trade balance showed a deficit in 2001, the first since 1991. It turned around in 2002.

The US Central Intelligence Agency (CIA) reports that in 2002 the purchasing power parity of France's exports was $307.8 billion while imports totaled $303.7 billion resulting in a trade surplus of $4.1 billion.

The International Monetary Fund (IMF) reports that in 2001 France had exports of goods totaling $291 billion and imports totaling $289 billion. The services credit totaled $80 billion and debit $62 billion. The following table summarizes France's balance of payments as reported by the IMF for 2001 in billions of US dollars. 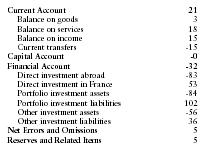