Finland, a province and a grand duchy of the Swedish kingdom from the 1150s to 1809 and an autonomous grand duchy of Russia from 1809 until the Russian Revolution in 1917, has been an independent republic since 1917. Ancestors of present-day Finns—hunters, trappers, agriculturists—came to Finland by way of the Baltic regions during the first centuries AD , spreading slowly from south and west to east and north. Swedish control over Finnish territory was established gradually beginning in the 12th century in a number of religious crusades. By 1293, Swedish rule had extended as far east as Karelia (Karjala), with colonization by Swedes in the southwest and along the Gulf of Bothnia. As early as 1362, Finland as an eastern province of Sweden received the right to send representatives to the election of the Swedish king. On the basis of the Swedish constitution, Finland's four estates—nobles, clergy, burghers and peasant farmers—were also entitled to send representatives to the Diet in Stockholm. As a result of over six centuries of Swedish rule, Finnish political institutions and processes (marked by growing constitutionalism and self-government), economic life, and social order developed largely along Swedish lines. Swedish colonization in Finland was concentrated in the southern and western regions of Finland.

When Sweden was a great power in European politics in the 17th century, Finland and the Finns bore a heavy military burden. Finland was a battleground between the Swedes and Russia, whose encroachments on southeastern Sweden were persistent as Swedish power declined in the 18th century. After Sweden's military defeat in the Napoleonic wars of 1808–09, sovereignty over Finland was transferred to Russia from Sweden after Napoleon and Tsar Alexander I concluded the Peace of Tilsit. Under the Russian rule of Alexander I, Finland was granted a privileged autonomous status that enabled Finland to continue the grand duchy's constitutional heritage. Alexander I, like his successors, took a solemn oath to "confirm and ratify the Lutheran religion and fundamental laws of the land as well as the privileges and rights which each class and all the inhabitants have hitherto enjoyed according to the constitution." Toward the end of the 19th century, a Russian drive to destroy Finland's autonomy ushered in several decades of strained relations and galvanized the burgeoning nationalist movement. Culturally, the nationalist movement in Finland was split linguistically between the Fennomen who advocated Finnish language and culture and the Svecomen who promoted the continued dominance of Swedish. By the end of the 19th century, the Fennomen had gained the upper hand. In Russia's Revolution of 1905, Finland managed to extract concessions that included the creation of a modern, unicameral parliament with representatives elected through universal suffrage, including women. Thus, Finland was the first European country to offer women political suffrage at the national level. After the Bolshevik seizure of power in Russia in the late fall of 1917, Finland declared its independence on 6 December. A short civil war ensued (28 January–10 May 1918) between the Red faction supported by the Soviet Bolsheviks and the White faction supported by Germany. The White forces, led by General Mannerheim, were victorious, but Finland was forced to reorient its alliances toward the western allies when Germany was defeated in WWI.

In July 1919, Finland became a democratic parliamentary republic. In the nearly two decades of peace following the settlement of disputes with Sweden (over the Åland Islands) and the former USSR (East Karelia) there were noteworthy economic and social advances. Despite its neutral pro-Scandinavianism in the 1930s and support for the collective security provisions of the League of Nations, the country was unavoidably entangled in the worsening relations between the great powers. Negotiations with the former USSR, which demanded certain security provisions or 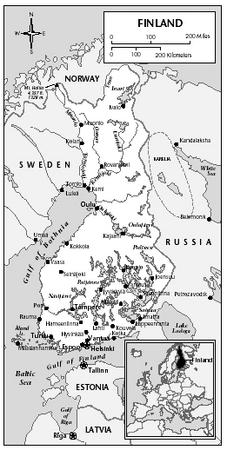 territorial concessions, broke down in 1939, and two wars with the USSR ensued. The Winter War, lasting from 30 November 1939 to 13 March 1940, ended only when Finland ceded areas of southeastern Finland and the outer islands of the Gulf of Finland to the Soviets. However, Finland watched warily as the Soviets annexed the independent Baltic states of Estonia, Latvia, and Lithuania. After appeals to western allies went unfulfilled, Finland turned toward Germany for protection, and when Germany attacked the USSR on 26 June 1941, Finland entered the war on the German side. During the early part of the Continuation War, which lasted from 26 June 1941 to 19 September 1944, the Finns pushed the Soviets back to the old frontier lines and held that position for nearly three years. In 1944, a Russian counterattack forced Finland to ask for peace. The armistice terms of 1944, later confirmed by the Paris Peace Treaty of 10 February 1947, provided for cession of territory and payment of reparations to the Soviets and required Finland to expel the German troops on its soil; this resulted in German-Finnish hostilities from October 1944 to April 1945. Under the 1947 peace treaty Finland ceded some 12% of its territory to the USSR, imprisoned several prominent politicians, reduced its armed forces, and undertook to pay heavy economic reparations. A Soviet naval base was established only 25 km from Helsinki. A separate Treaty of Friendship, Cooperation, and Mutual Assistance, concluded in 1948 under heavy Soviet pressure, obligated Finland to resist attacks on itself or the USSR and in effect precluded Finland from undertaking any significant foreign policy initiative without the Kremlin's approval.

Finland's postwar policy, based on the Paasikivi Line named for the president that formulated the policy, has been termed dismissively as "Finlandization." It is true that Finland maintained a scrupulous and cautious policy of neutrality in foreign affairs. However, after 1955, when the Soviets withdrew from their Finnish base, Finland became an increasingly active member of the United Nations and the Nordic Council, as well as various Western economic organizations. Despite Soviet pressure, the Finnish Communist Party steadily declined in influence. Finland's standing was further enhanced by the signing of the 1975 Helsinki treaty, which called for pan-European cooperation in security, economic, political, and human rights matters. The dominant figure of postwar politics was Urho Kekkonen, the Agrarian (later Center) Party leader who held the presidency from 1956 to 1981, when he resigned because of ill health. The cornerstone of his policy was maintenance of a center-left coalition (including the Communists), good relations with the former USSR, and a foreign policy of "active neutrality."

Despite the negative connotations, "Finlandization" was something of a success. Unlike the Baltic states, Finland maintained sovereign independence and even managed to prosper in the post-WWII environment. Postwar political stability allowed a striking economic expansion and transformation in Finland. In 1950, nearly 70% of Finns worked on the land; now that figure is about 6%. Kekkonen's long rule ended in a resignation owing to ill health and the Social Democratic leader Mauno Koivisto, then prime minister, became acting president in October 1981. Koivisto was elected president in his own right in January 1982 and reelected in 1988.

Koivisto tenure as president ended in 1994. In the presidential elections of February 1994 when voters for the first time directly elected the president, Martti Ahtisaari, former UN mediator and of the Finnish Social Democratic Party, defeated Elisabeth Rehn (Defense Minister) of the Swedish People's Party in a runoff election. Ahtisaari chose not to run for reelection in 2000, and in that contest no fewer than five candidates for the presidency were women. On 6 February 2000, Finns elected their first female president, Tarja Halonen, the Social Democratic Foreign Minister in the Lipponen government, who won 51.6% of the vote in a runoff electoral contest with Esko Aho, leader of the Center Party.

Finland faced a deep recession brought about in part by the collapse of the Soviet market that accounted for 20% of Finnish exports. During 1991–94, the recession pushed unemployment up to nearly 20%. The collapse of the Soviet Union and the dissolution of the FCMA Treaty by mutual agreement of Finland and the USSR prompted Finland to reassess its relationship with Europe. In March 1994, Finland completed negotiations for membership in the EU. Finland's relationship with the EU was a major issue of political debate even within the governing coalition. Following a referendum held in October 1994 with 57% approval, Finland formally joined the EU at the beginning of 1995. Finland also joined the European economic and monetary union in 1999, and adopted the euro as its currency in2002.Beyond Finlandization: Finland and the European Union

While a relative newcomer to European politics, Finland entered the political limelight as they took over the six-month rotating presidency of the European Union in the second half of1999. The priorities of the Finnish presidency included a number of pressing issues: preparing for institutional reform necessary prior to enlargement of the Union; increasing the transparency of the functioning of EU institutions; boosting employment and deepening the social dimension of European cooperation; environmental responsibility; and finally, in the area of foreign policy, the Finns championed the "Northern Dimension" which would extend a number of cooperative schemes to include the EU and non-EU countries along the Baltic, including increased ties with northwestern Russia. Though highly touted, this last initiative foundered as Europe continued to be preoccupied with the ongoing NATO efforts in Kosovo. At the presidency's concluding summit (December 1999) of the European Council in Helsinki, the Finns could nonetheless point to a number of successes under their presidency. The groundwork for opening accession negotiations with six more applicant countries from Eastern Europe and recognizing Turkey's applicant status were approved by the 15 heads of state. In addition, the European Council approved the establishment of a rapid reaction force outside the structure of NATO, which would allow Europe to have an independent capacity to react in areas in which NATO was not engaged. This was an important accomplishment for Finland, whose neutral status makes participation in NATO actions problematic. However, in recent years, Finland has considered NATO membership; its military policy calls for increased cooperation with and participation in NATO and EU-led operations, including NATO's "Partnership for Peace" program. The issue of Finland's support for the US-led war in Iraq that began on 19 March 2003 was a deciding factor in the 16 March parliamentary elections. Opposition leader Anneli Jäätteenmäki accused sitting Prime Minister Paavo Lipponen of moving Finland too close to the US position on the use of military force to disarm Iraq, and her party went on to win the elections, albeit by a slim majority. Finland donated 1.6 million euros for humanitarian aid in Iraq.

It is a short and brief, but good writing of the history