The new government exercises fiscal responsibility characterized by a strictly balanced budget. No transfers or preferential credits are given to public enterprises, and governmental borrowing from the central bank is forbidden. In January 1996 Estonia instituted a centralized treasury system for managing the government's budget.

The US Central Intelligence Agency (CIA) estimates that in 2002 Estonia's central government took in revenues of approximately $1.9 billion and had expenditures of $1.9 billion. External debt totaled $3.3 billion. 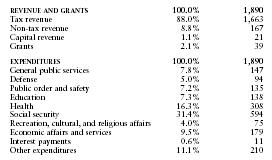