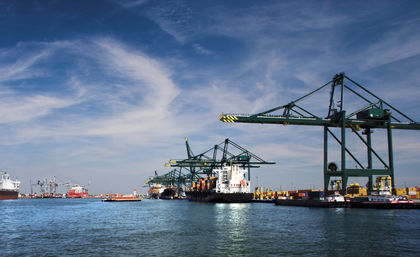 Industry, highly developed in Belgium, is devoted mainly to the processing of imported raw materials into semifinished and finished products, most of which are then exported. Industry accounted for 24% of GDP in 2001. Steel production is the single most important sector of industry, with Belgium ranking high among world producers of iron and steel. However, it must import all its iron ore, which comes principally from Brazil, West Africa, and Venezuela. About four-fifths of Belgium's steel products and more than three-quarters of its crude steel output are exported. In recent years, Belgian industry has been hampered by high labor costs, aging plant facilities, and a shrinking market for its products. Nevertheless, industrial production rose by nearly 11% between 1987 and 1991, as a result of falling energy costs (after 1985) and financial costs, and only a moderate rise in wage costs. Industrial production continued to rise in the late 1990s; 1997 registered a 4% growth rate, while it slowed to3.1% in 1998. The industrial growth rate in 2000 was 5.3%; it was -0.5% in 2001, and registered an estimated 0.6% in 2002.

Production of crude steel declined from 16.2 million tons in 1974 to 11.3 million tons in 1991, while the output of finished steel dropped from 12.2 million tons to 8.98 million. By 1981, 60% of all Belgian steel production and 80% of all Wallonian steel (concentrated in Charleroi and Liège) came under the control of a single company, the government-owned Cockerill-Sambre. Plans for this firm, whose government subsidies ended (in conformity with EC policy) in 1985, called for heavy investment in plant modernization, coupled with cutbacks in employment and plant capacity.

In 1998, Belgium produced 342,000 tons of crude copper. The country also produces significant amounts of crude zinc, and crude lead. The bulk of metal manufactures consists of heavy machinery, structural steelwork, and industrial equipment. The railroad equipment industry supplies one of the most extensive railroad systems in Europe. The automotive industry is strong: Belgium produced 1,187,257 automobiles in 2001, a 15% increase over 2000. It also manufactured 30,499 heavy trucks in 2000, an increase of 20% over 1999. An important shipbuilding industry is centered in Temse, south of Antwerp. Belgian engineering and construction firms have built steel plants, chemical works, power stations, port facilities, and office buildings throughout the world.

The textile industry, dating from the Middle Ages, produces cottons, woolens, linens, and synthetic fibers. In 1991, spinning industry production (including cotton, wool, linen, and jute) totaled 172,329 tons of yarn, and the weaving industry produced 520,616 tons of fabric. With the exception of flax, all raw materials are imported. Centers of the textile industry are Bruges, Brussels, Verviers, Ghent, Courtrai (Kortrijk), and Malines (Mechelen). Carpets are made in large quantities at Saint-Nicolas (Sint-Niklaas). Brussels and Bruges are noted for fine linen and lace.

The chemical industry manufactures a wide range of products, from heavy chemicals and explosives to pharmaceuticals and photographic supplies. Production in 1991 included sulfuric acid, 1,935,921 tons; nitric acid, 1,439,533 tons; synthetic ammonia, 505,380 tons; and crude tar, 177,230 tons. The diamond-cutting industry in Antwerp supplies most of the US industrial diamond requirements: over 50% of the global business in uncut diamonds is carried out in Antwerp. Those working in the Belgian diamond industry are increasingly being pressured to refrain from buying "conflict diamonds" from Africa, whose proceeds have fueled civil wars in a number of African countries, including Sierra Leone, the Democratic Republic of the Congo, and Angola. Belgium has one of the largest glass industries in the world. Val St. Lambert is especially known for its fine crystal glassware. Belgian refineries (chiefly in Antwerp) turn out oil products.

yes this is relly good for my project to! thx! but itheirs so much! (wich is good) but so much to read
3
Aaryaman

this helped me out a lot for my project im doing on belgium awesome website TY!!! :)
6
Victoria

This website is awesome it helped me alot with my french project!!! THANKS!(;
7
Maccleson

Well might as well say what everyone else is saying THANK YOU!!! VERY HELPFUL FOR MY PROJECT!!! @_@
8
Evan

Website was very helpful for my project Thx for the information!
10
Hope

So much information that I definitely needed. Thanks LOTS. :)
11
rahul

More focus on the diamond industry was expected. can anyone suggest some websites for the industrial diamond market in Belgium?