The Belarussians are the descendants of Slavic tribes that migrated into the region in the 9th century. They trace their distinct identity from the 13th century when the Mongols conquered Russia and parts of Ukraine. During this period, Belarus managed to maintain its identity as part of the Grand Duchy of Lithuania. The merger of the Grand Duchy with Poland in 1569 put the territory of Belarus under Polish rule. After the division of Poland in the late 18th century, Belarus fell to the Russian Empire.

In March 1918, at the time of the Soviet-German Treaty of Brest-Litovsk in which Moscow agreed to relinquish claim to a substantial amount of territory Germany had captured in exchange for peace, the Belarussian National Republic was formed with German military assistance. However, after the German government collapsed in November 1918 and German forces were withdrawn from the region, Bolshevik troops moved in and set up the Belarussian Soviet Socialist Republic in January 1919. In 1922 the Belarus SSR became one of 15 socialist republics to form the Union of Soviet Socialist Republics. Two years later, Belarus's borders were enlarged at the expense of Russia and Ukraine. Later, parts of eastern Poland were annexed to Belarus by Stalin under the 1939 Molotov-Ribbentrop pact. However, Belarus was devastated by World War II.

During the decades of Soviet rule, Belarus underwent intense russification, and its leaders generally complied with Soviet policy. However, after extensive nuclear contamination by the 1986 Chernobyl accident in neighboring Ukraine, Belarussian nationalists, acting from exile in Lithuania, organized the Belarussian People's Front. The nationalist upsurge of the period was intensified by the discovery of mass graves from the Stalinist purges of the 1930s at Kuroplaty and other locations. Although the Belarussian leadership still supported keeping the Soviet Union intact, Belarus's parliament declared Belarus a sovereign state within the USSR in July 1990. Shortly after the abortive August 1991 coup attempt against Mikhail Gorbachev, Belarus declared its independence on 26 August 1991.

Belarus's first president, Alyaksandr Lukashenko, was elected in July 1994, the same year the country adopted its first post-Communist constitution. Lukashenko has halted economic and political reform, and he has silenced and even jailed his critics using internal security forces. At the end of 1996, Belarus sent the last of its nuclear missiles back to Russia. Also in November 1996, Lukashenko won a plebiscite to expand his power as president, although most observers agreed that the election was not fair. On 28 November 1996, Lukashenko signed into law a new constitution containing provisions that gave him almost total control of all branches of government and extended his term by two years to 2001. A new bicameral National Assembly replaced 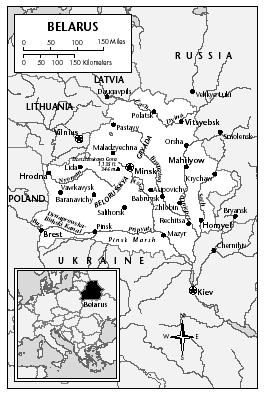 the old Parliament. During 1996, Lukashenko suspended the registration of new enterprises, stopped privatization, and spurned World Bank assistance. Under the new constitution, he has the right to hire and fire the heads of the Constitutional Court and the Central Bank, and he also has the right to dissolve parliament and veto its decisions. Most members of the international community criticized the plebiscite expanding Lukashenko's power, and do not recognize the 1996 constitution or the bicameral legislature that it established.

The constitutional changes implemented by the president sparked strong protests, including public demonstrations and opposition by the Constitutional Court and members of parliament, some of whom attempted to form their own assembly. However, all dissent was effectively repressed, and Lukashenko remained in power. After boycotting the April 1999 local elections, his political opponents held an alternative presidential election in July. This was followed by a new crackdown that forced opposition leader Semyon Sharetsky into exile. From exile Sharetsky proclaimed himself the nation's legitimate ruler, but his action had little effect of the actual state of political affairs in the country. Another prominent political dissident, Voctor Gonchar, was reported missing in September 1999.

In April 1997, Lukashenko and Russia's President Yeltsin signed an initial charter for economic union that included a plan to adopt a common currency. However, over the following two years, implementation of the integration plan moved slowly, and in September 1999, Belarus took steps to peg the country's currency to the euro. Nevertheless, at the end of year, Belarus and Russia reaffirmed their intentions of forming an economic alliance. The leaders of both countries signed a new treaty in December 1999, and it was approved by both parliaments. In April 2000 Russia's new president, Vladimir Putin, reconfirmed his country's commitment to strengthening ties with Belarus.

Parliamentary elections were held in October 2000, and were criticized by election observers as being neither free nor fair. Lukashenko and his administration manipulated the election process to make sure a minimum of opposition candidates were elected to parliament. Turnout in 13 constituencies was so low that a re-run was necessary (it was held in March 2001). On 9 September 2001, Lukashenko was reelected president in what Organization for Security and Cooperation in Europe (OSCE) observers described as undemocratic elections, neither free nor fair. Lukashenko won 75.6% of the vote, with opposition candidate Vladimir Goncharik winning 15.4% and Liberal Democratic Party leader Syargey Gaydukevich winning 2.5%. The government reported 83.9% of eligible voters participated in the election.

In June 2002, Russian President Vladimir Putin refused to follow the path to integration that Belarus had sketched out for the two nations, saying it would lead to the recreation of "something along the lines of the Soviet Union." Lukashenko pledged not to relinquish Belarus's sovereignty in the union with Russia, while Putin in August put forth a proposal for the "ultimate unification" of both countries. Putin envisioned a federation based on the Russian constitution, with the Russian ruble as the state's sole currency and the election of a president in 2004. A constitution for the union was approved in March 2003. In April, the speaker of the Russian Duma indicated Armenia, Ukraine, and Moldova might be probable candidates for joining the Belarus-Russian union. A referendum on the constitution is planned in Russia and Belarus at the end of 2003, and elections for a joint parliament are to take place in 2004.

In November 2002, 14 EU states (minus Portugal) imposed a travel ban on Lukashenko and several of his government ministers as a way of protesting Belarus's poor human rights record. In February 2003, Lukashenko pledged support for Iraq in the prelude to war which began on 19 March, led by a US and UK coalition. Analysts stated such a declaration of support was directed more at the Belarusian public as a way of increasing Lukashenko's image as a strong and independent leader.